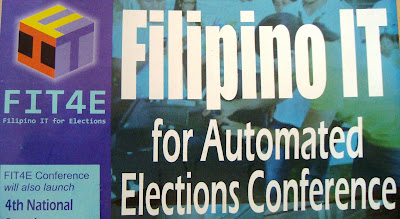 Last Monday I attended a whole-day seminar titled “FILIPINO IT for Automated Elections Conference (FIT4E Conference)" sponsored by the Automated Elections System Watch (AES Watch), an umbrella organization for about 40 Information Technology (IT) groups, and held at the ultra-modern GT-Toyota Asian Cultural Center at the UP in Diliman, Q.C. It was an impressive assemblage of Filipino IT expertise---this time to tackle once and for all the matter of election automation in this country.
The AES is a movement of “election watchdogs,” IT groups and professionals, academic scholars, policy think tanks, computer science school organizations, NGOs, church-based institutions and other groups that was conceived in late 2009, at the height of preparations for the May 10 automated elections; it was formally launched in January 2010 with the main aim of making automated elections “compliant with the law, international standards of trustworthiness and suitable to Philippine conditions.”
Judging from last Monday’s seminar, held under the auspices of the new UP president Alfredo Pascual and Philippine Computer Society Foundation president Nelson Celis, the AES Watch is resolved to take center-stage in the coming Philippine automated elections.  As Ma. Corazon Mendoza-Akol, president of the Philippine National IT Standards Foundation, put it, the AES implemented in May 10, 2010 elections, being the first of its kind on a national level, “can be excused for several glitches in the implementation of the System. But she asserted that "a discerning public will surely not be fooled to accept (these failures and shortcomings), lock, stock and barrel a second time.”
XXX
AES Watch participated actively in Congress deliberations that drew up R.A. 9369, the Automation Election Law, and even challenged many aspects of the automation program offered by the foreign-based Smartmatic and its Filipino partner, Total INformation Management (TIM); some local computer companies sought to push their own automation program, but couldn’t match Smartmatic’s sales pitch before a Congress and a poll body that obviously regarded anything foreign automatically better than a Pinoy production.
But as the 2010 elections wound up amid the horrifying chaos and confusion of that momentous day, and  election protests sprouted around the country, Filipino IT groups declared, and are now declaring with more vehemence: "Enough is enough. We cannot allow our democratic processes to be endangered again by 'malicious intruders.' "
XXX
From what I saw last Monday, the local IT experts have united. Putting their collective credentials on the table, they are determined to push Filipino computer technology and tailor it to the “uniquely Filipino” election system that’s far more complex than those of other countries. At the seminar the Pinoy IT groups launched the “Fourth National Search for Product Excellence in IT (Automated elections System).”  The year-long search, open to any Filipino citizen or organization and launched in cooperation with the Department of Science and Technology and the Commission on Elections, is geared toward looking for a Pinoy-designed and executed AES that’s “transparent, secured and with an AUDITABLE election technology to be used in the 2013 elections” (underscoring mine).
No more foreign-designed technology for 2013. 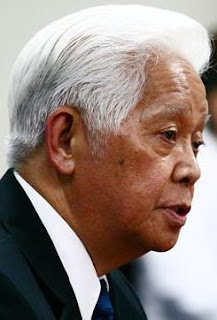 Tall tales? Big dreams? Time will tell, as we follow this crucial search over the coming weeks and months. I'm in total support of Filipino IT technology for our elections, and I can only envy India for painstakingly devising an all-local technology for its 600 million voters in their parliamentary elections.


Suffice it to say for now that I found quite heartening the attitude of the Comelec, led by its still-to-be confirmed by the Commission on Appointments Chief, Sixto Brilliantes, toward this search for a Pinoy election system. At the seminar Brilliantes was accompanied by three commissioners, namely, Rene Sarmiento, Armando C. Velasco and the latest appointee, the still also-unconfirmed IT expert Gus Lagman.


In his brief remarks, the Comelec Chief noted the “adversarial” relationship between the Comelec of his predecessor’s era and the local IT experts. The clash  centered mainly on the issue of the “source code” used in the last elections, which is to IT practitioners what the “grand recipe” is to a bunch of chefs; others called it the  "road map" to automation. Smartmatic/Comelec has consistently resisted its disclosure to the IT people even before the elections, in violation of Sec. 12 of RA 9369, and even though the government had paid P200 million for the technology alone (the total contract with Smartmatic-TIM, including the lease of the PCOS machines, came to a whopping  P11.3 Billion).
XXX


Brilliantes said with a wry smile that “with the sanction of his en banc Comelec” represented that day, he’s committing to supporting the National Search for a Filipino technology for the AES; but he also added that he had not yet made up his mind on how far that support would be. Some IT folks later begrudged that latter phrase as a take-back of his support pledge of the earlier minute, but to me that was good enough for an opening relationship with the local IT experts---a far cry from the “acrimonious” Melo yesteryears.
More on the Pinoy IT experts’ struggle to get their rightful place in the Philippine electoral firmament.
XXX
Last week the Senate voted to follow the House’s lead and abort the ARMM elections originally scheduled for August 8. A number of civic organizations and politicians, especially those who had planned to run in the elections, now want to challenge before the Supreme Court the constitutionality of that move of Congress; but the problem is that only a law can be challenged and until the President signs the consolidated bill it does not become law.  In fact, two lawsuits against the House move were thrown out by the High Court earlier because they were challenging mere bills. The question is, when will P-Noy sign that bill?
The signing is rumored to take place next week, but then again that’s uncertain; in fact there’s talk that some advisers are coaxing P-Noy to delay it as much as possible, obviously to stymie court challengers. But if he wishes to help calm the waters already roiled up by the abortion of the ARMM elections, he should sign it asap.  A challenge in our courts is a constitutional right of citizens and it’s still much better than other forms of dissent such as violence or civil disobedience, as former Gov. Al Tillah's group is contemplating if their court suit does not progress. Delaying the signing of the bill into law would not spell sincerity and would only worsen the grievance of those affected by the postponement of the elections.
XXX
Another area of discontent is P-Noy’s appointment of OICs for various ARMM positions, beginning with the governor, when the elective positions become vacant on Sept. 30. A vetting committee composed of  DILG Secretary Jesse Robredo, Presidential political adviser Ronald Llamas and Peace Process Adviser Ging Deles was formed. But the problem is that these Cabinet officials are all from Christian Manila---people are now asking: will they recommend Christians to the vacant positions?


Comelec Chief Sixto Brilliantes has opined that P-Noy does not have to appoint Muslims and in fact even Fr. Eliseo Mercado of Cotabato’s Notre Dame University, who had opposed postponement earlier, now opines that religion should be taken out of this issue. But the reality in ARMM is that religious affiliation is central, and it would be quite impolitic for P-Noy to appoint Christians to the vacant posts---baka from imperial Manila pa!
On the other hand, I can see why he’d prefer Christians, as perhaps in his advisers’ mind, this would avert clashes among the Muslim political families. As if to say, sige, wala muna kayong lahat. But would Christians be able to rule in ARMM?
XXX
A related worrisome issue is that the Senate adopted the House version in toto, except  the provision that appointed officials cannot run in the synchronized 2013 elections, which the Senate deleted. This means that P-Noy appointees could well be feathering their nests in the 1 1/2 years until the 2013 elections, to the disadvantage of their rivals. The reaction in ARMM to the Senate deletion is quite bad, and Congress leaders now talk about the need for a bicameral conference committee to reconcile the two versions of the bill. But all the legislators are vacationing probably abroad. 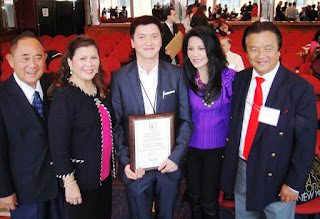 Congrats to Felipe Cruz III, son of Rep. Gina de Venecia of Pangasinan's 4th District and industrialist Felipe Cruz II, who recently graduated at the top of his class at New York University with a Master of Science degree in Publishing and received the Award for Excellence in Magazine Publishing, with a cumulative grade of 3.95 out of 4.  Philip III brought honor to himself, his family and the country at the NYU graduation held at the Yankee Stadium, where former US President Bill Clinton was guest of honor, and the Cruz and De Venecia families, led by Philip's step-dad, former Speaker JDV, were fully represented.
Philip III, in garnering the top award, bested editors and digital executives of top US media outlets, including Time, Esquire, Elle Magazine, AOL and AP, proving once more, as mom Gina put it, "that the Pinoy journalist can compete in global areas and prevail." Philip began his print media career in 2003 as magazine columnist in Star and in 2005, he joined the magazine publishing section of ABS-CBN where he was promoted to  associate publisher, overseeing lifestyle magazines of various categories. He earlier attended Stanford University's "Professional Publishing course" for magazine executives.

For reactions/comments to this blog, pls. email:
polbits@yahoo.com
Posted by Veteran Journalist and Relentless Advocate of Truth at 8:55 AM