Tuesday, May 10, 2011
Rome---Filipinos in Italy and all over the world doubtless greeted the victory of our own Manny Pacquiao over challenger Sugar Shane Mosley last Sunday with jubilation, even as we all feel that “we were all had” because the black challenger preferred to run away most of the time than to meet the Pinoy champ’s blows. The talk that Mosley was there not to stage a respectable fight, but only to stay on his feet long enough to collect what was due him in the end as challenger, was confirmed by what was easily obvious in the ring. 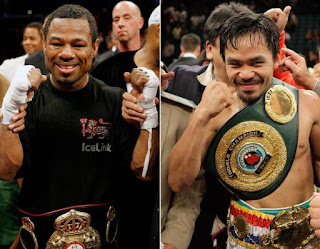 So, Manny won handily in a 9-round decision---which is just great. But given this fairly easy victory, many of his compatriots feel that our national boxer should now hang up his gloves, for after all, there are no longer worlds for him to conquer. Manny should now concentrate on being a good and effective member of the House of Representatives and carry out the programs he articulated in his campaign. He should concentrate on programs for the poor, especially for sports people who are in dire poverty and ill state of health. Manny should also use his enormous influence to promote Philippine sports and raise it to regional, if not international standards---to pull it away from the doldrums and the poison of politics that have always affected it.
There’s a lot of work to do right in the House, Manny. Please hang up your gloves and start working.
XXX
In an earlier blog I had written of the devotion of the late Pope John Paul II, who was declared Blessed in moving beatification ceremonies in Rome last May 1 before over a million people from around the world, to St. Faustina Kowalska, the Polish Mystic who lived earlier in the 20th century and who founded the devotion to the “Divine Mercy.” In 1993 JPII beatified Sr. Faustina, who claimed to have visions and revelations from Christ, his Mother and other saints, and canonized her in 2000, making her the first saint of the new millennium. That same year JPII also established the “Divine Mercy Sunday” every first Sunday after Easter Sunday. 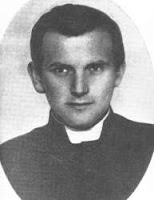 It has been pointed out by writer John Allen Jr. in the National Catholic Reporter that one of the reasons for JPII’s attachment to Sr. Faustina, aside from their being compatriots, is his own “strong mystical streak,” which also manifested itself with his deep impression with and dedvotion to St. John of the Cross. The Spanish Mystic who was born in Fontiveros, Spain, in 1542, was considered the Father and Spiritual Master of the Teresian Carmel that was reformed by the great St. Teresa of Avila; as JPII put it, it was St. John of the Cross who guided Teresa “through the last stages of her mystical ascent.”
XXX
It’s no secret in Church circles that the young Fr. Karol Wojtyla, later to become Pope John Paul II, once contemplated becoming a Carmelite priest (as shown in the very rare photo below, young Karol Wojtyla, then a factory worker in his native Poland, was already wearing the brown scapular, symbol of the devotion to Our Lady of Mt. Carmel that the Carmelites have been propagating for centuries). It’s left to ecclesiastical writers to speculate that had he joined the Carmelites, given his eloquence, human touch and devotion to his priestly ministry, Fr. Wojtytla might have become Father-Superior of the Carmelite Order around the world. But he probably would not have ended up as the Pope who reigned for 27 years on the Throne of Peter, the second-longest rule in the Church, and who was recently declared by his successor, Pope Benedict XVI, as Blessed. Conceivably he would be declared Saint in the near future, but perhaps never as a Carmelite priest.
XXX 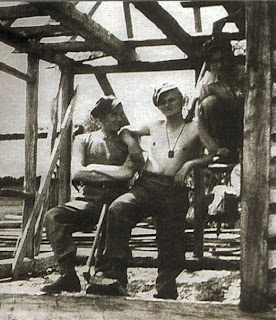 On Dec. 14, 1990, JPII paid tribute to St. John of the Cross in an “Apostolic Letter” in the thirteenth year of his pontificate, to mark the beginning of the world commemoration of the 400th death anniversary of the Spanish Mystic (who died on Dec. 14, 1591 in the convent of Ubeda in Spain). In his Apostolic Letter, which he titled “Master in the Faith,” JPII admitted that “from the first years of my priestly formation,” he had found John of the Cross “a sure guide in the ways of faith.” In fact, continued JPII in his eloquent language, in Rome in 1942 “I wrote my doctoral thesis in theology on the subject of Faith according to St. John of the Cross.” It was a time "when Europe was still bathed in the afterglow of the fourth centenary of the birth of the Carmelite Saint (1542) and rising from its ashes after the dark night of war…”
XXX
Blessed John Paul spelled out his fascination with John of the Cross in that Apostolic Letter, where he wrote how the Saint’s biographers conveyed “a dynamic picture of him” which could be a model for the modern Christian. As the late Pope put it, the mystic Saint shows us “that the Christian “can find complete fulfillment in the contemplative life.” He stressed, “The contemplative does not limit himself to spending long stretches in prayer.” Rather, said JPII, as a youth John learned to nurse the sick and to lay bricks and stones and to work in the orchard and adorn the church. As an adult, he discharges responsibilities in government and formation, attentive always to the spiritual and material needs of his brethren.”
Speaking of the Spanish Mystic in the present tense, probably to drum up the latter's contemporaneousness, JPII continued: “(John of the Cross) goes on long journeys by foot in order spiritually to assist his sisters, the Discalced Carmelite Nuns, for he is convinced of the value of their contemplative life for the Church.” He stressed that St. John’ attitude may be summed up by a basic conviction: “It is God and God alone that gives value and meaning to every activity, ‘For where God is unknown, nothing is known.’ “ But the late Pope was careful to stress to modern Christians how the 16th-century Saint had to go through his own "dark night of the soul" in his struggle for holiness and union with God---that conquering one's weaknesses does not come easy even for a mystic saint.
XXX 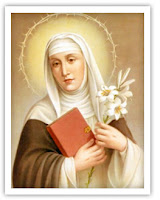 In Italy I was fortunate to be with my son Conrad and daughter-in-law Myra and our family friend Dean Ileana “Nena” Cruz of the Emilio Aguinaldo College department of Pharmacy, and even more fortunate to have my elder son, Buddy, columnist of the Manila Times and TV personality, link up with us on that first leg of our brief European trip. Buddy was luckier than we as he got closer to the beatification rites in St. Peter’s Square than we did.
After Buddy expertly guided us through Rome for a day, we all took the train the following day for a one hour and twenty minute-ride to Tarquinia, north of Rome, which was once the seat of Etruscan civilization; there our longtime family friend, the sculptor-painter Tomas Concepcion maintains an estate and we had a good reunion. The following day Buddy convinced us all to take the two and a half hour-train ride to Siena, the medieval town that’s dominated by the shadow of St. Catherine. It was a great decision as Siena is so beautiful, with a magnificent cathedral that probably boasts of one of the most baroque facades in all of Europe and a huge circular piazza. For us journalists, however, Siena is particularly meaningful as St. Catherine, who exercised considerable influence among Church and secular leaders in her time, is considered the patron of the media. We invoked her intercession in our work.
For comments/reactions:
please email polbits@yahoo.com
Posted by Veteran Journalist and Relentless Advocate of Truth at 3:32 AM