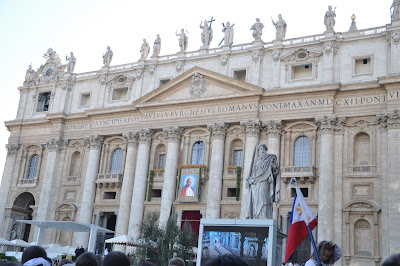 Rome, Italy---The crowds expected at Pope John Paul II’s beatification last Sunday were being pegged at first at no more than 300,000 for a number of reasons. The Royal Wedding in London the preceding Friday was said to have cut the Rome crowd in half; moreover, times were tough economically and the weather was not very good. Another big reason for the expected low turnout was that Rome hotels were said to have jacked up their prices way before the beatification, perhaps in anticipation of crowds similar to the mammoth throngs that flocked to the funeral of JPII in April 2005.

All these were said to have frightened his devotees that two days before his beatification we kept hearing of turnout of only around 300,000 people. I thought, kakalug-kalog ang St. Peter’s. Kawawa naman si JPII.

Poles flock to Rome for their compatriot

But the day before the event, people descended on Rome from everywhere in unbelievable numbers. The Poles, ever grateful to their compatriot JPII for supporting them all the way in their battle against Communist totalitarianism, arrived on trains and in over 200 huge buses from all over Poland with their families, waving their red and white flags. Last Saturday they occupied the sidewalks around the Vatican with their sleeping bags and blankets, and the innumerable portalets assembled by the Rome Commune helped make their lives a bit bearable.

In the VIP box at the beatification ceremonies, Lech Walesa, who led the Solidarity movement against the communist dictatorship in Poland in the ‘90s, was acknowledged by the international media. Looking back, the world is grateful for JPII’s unwavering support for the cause of freedom in his homeland; for without it, Walesa and his fellow freedom-fighters might not have had to courage to persist, in order to achieve their bloodless revolution that, in turn, helped hastened the fall of Communism in Eastern Europe. 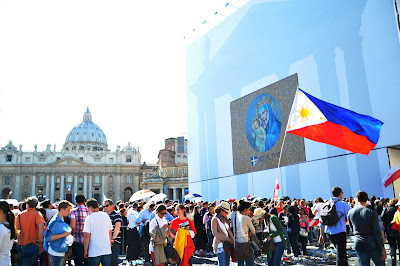 The Romans themselves also turned out for the smiling courageous ‘Papa Giovanni Paulo’ who had lived among them for at least 27 years, so that by Sunday morning, all roads leading to the Vatican were choked with people. If one was not there by 5 am. it became pretty hopeless to get into St. Peter’s Square for the 10 am. beatification rites; the shut-out pilgrims had to be content to watch the proceedings from giant monitor screens in various places in the city.
News reports said more than a million people turned up for JPII’s big event, but if you saw how deep the crowds were in various labyrinths leading to the Square, who couldn’t get in, including several thousands of Filipinos working in Italy, it was definitely closer to 1.5 million, I’d say.

Over the past one dozen years, this city has seen record turnouts at either the canonization or beatification of religious personalities. One can easily recall the canonization of the mystic Polish nun Faustina Kowalska, the founder of the "Divine Mercy" devotion and the stigmatic Padre Pio of Pietrelcina, who as a “hometown favorite” drew perhaps a million pilgrims. There were also the canonization rites for St. Josemaria Escriva, the Spanish founder of Opus Dei, in October 2002 and those of Mother Teresa of Calcutta and earlier, of the much-loved Pope John XXIII, which were also record-holders. Blessed John Paul certainly belongs in this big league.

Last Saturday, April 30, the day before JPII’s beatification, Rome was cold and raining. While my son Conrad, his wife Myra, our family friend Nena Cruz and I had talked about joining the all-night prayer vigil at the Circus Maximus, we thought it might be too cold for us there and we might get sick. But John Paul must have been watching over his big event, for later that afternoon the sun suddenly shone through and we decided to hop into a taxi for the Circus Maximus (JPII was also looking after his fellow Poles who were just camped out in the grassy parks). That huge arena is best remembered in ancient Imperial Rome for its chariot races (depicted in the movie Ben-Hur, where leading man Charlton Heston raced against Stephen Boyd, with the latter losing and being crushed to death by the chariot wheels).

I’m glad we were not daunted by the weather. For when we got to Circus Maximus it was already packed with tens of thousands of people holding candles in the darkened arena. Set against the soft glow of the now-muted ancient palaces of the Ceasars in the Palatine Hills, and with the testimonies from various people, including Sr. Marie Simone-Pierre, the French nun whose miraculous cure from Parkinson’s disease was attributed to the intercession of JPII, that candlelight vigil at Circus Maximus on the eve of the beatification was truly an awesome sight. It will remain one of the most vivid impressions of my life.


By the way, at that Roman vigil, the World Youth Day in Manila where JPII was welcomed by a record five million people at the Luneta in January 1995---said to be the largest reception he ever got anywhere during his 27-year reign---was again recalled. Doubtless the Pinoys present at Circus Maximus, who were waving a Philippine flag, waxed proud.

Benedict’s homage to his predecessor 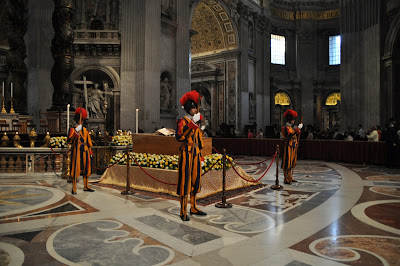 Very much a part of the beatification rituals, as followed by world television, was the homage paid to the newly proclaimed Blessed by Pope Benedict XVI and the cardinals and bishops. Right after the outdoor ceremonies in the Square, the Pope led them inside the Basilica, where his first act was to kneel in prayer before the pine-wood coffin of his former superior, near the elegant Baldacchino of Bernini and underneath the cavernous dome of Michaelangelo, after which the cardinals and bishops followed.

It was a most powerful symbol of Christian detachment from this world that the mortal remains of the late Pope, one of the most influential figures in contemporary times, has to rest in a simple, pine-wood box amid the baroque magnificence and opulence of St. Peter's Basilica.

In the afternoon the Basilica was opened to the public. Pilgrims from all over the world formed long queues and braved the heat of the spring sun as they stood on their feet for easily two hours, just to pay homage to the new Beato and seek his intercession for their personal intentions.

One has to marvel at the universal appeal of JPII. Pope Benedict, in his homily during the beatification, paid tribute to the Blessed as the “model of sanctity” and his “totus tuus” (which translates into “ako’y iyong iyo”) unison with Christ on the Cross in his sufferings---the assassination attempt and his long bout with Parkinson’s disease. Benedict also praised JPII’s strong and generous faith, his enormous love and devotion to the Mother of God, and his great respect for women and passionate love for children and human life.

Benedict also spoke of JPII’s efforts to bring various Christian faiths together. For instance, he was the first pope to ever visit the Jewish synagogue in Rome. At the canonization of St. Josemaria Escriva in 2002, I personally saw how he welcomed with a brotherly embrace the Patriarch of the Armenian Orthodox Church, to the roar of approval from the mammoth crowds. Pope Benedict also paid tribute to his predecessor's dedicated efforts to strengthen his fellow Poles' fight against the Nazi regime and later against Communist totalitarianism in his native country.

For a lot of JPII’s devotees, what touched them was his humanity. The prominent Rome-based Filipino sculptor-painter, Tomas Concepcion, who hailed from Mindanao and once represented the overseas Filipinos in the Philippine House of Representatives, narrated to us a little anecdote about JPII’s humor and human touch. 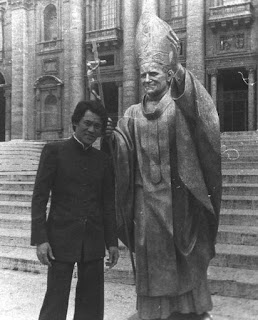 Years back Concepcion was commissioned to do a three-meter statue in bronze of the Pope, which now graces the area near the city hall in Guam’s capital of Agana. When he presented the statue to JPII himself at St. Peter’s Square, the Pope’s eyes twinkled and he cracked something in Italian, which translated into “Why, this statue looks far more handsome than me!” Afterwards he blessed the painter, put his arms around him and posed for photos with him. 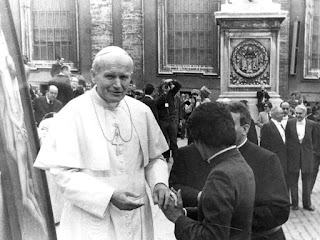 Years later, they met again at the papal summer residence at Castelgandolfo when Concepcion accompanied President and Mrs. Fidel Ramos on their call on JPII. The Pope remembered the presentation of his statue by the Filipino sculptor, but he got confused over the fact that Concepcion speaks Italian like a native and yet was introduced by FVR as a member of the Philippine House of Representatives.

Tomas Concepcion, who’s not the greatest admirer of the Church, has only fond memories of his papal friend.

For comments/reactions, pls. email:
polbits@yahoo.com
Posted by Veteran Journalist and Relentless Advocate of Truth at 1:00 AM