For legions of Divine Mercy devotees, a footnote on JPII and Sr. Faustina 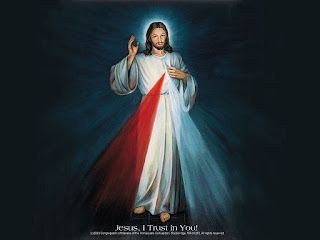 Venice, Italy---Before I close my notebook on the recent beatification of Pope John Paul II in Rome, there are two things that ought to be pointed out. One is that it was no accident that this grand event occurred last Sunday, May 1, for that also happened to be “Divine Mercy Sunday,” which is celebrated in the Church liturgical calendar on the second Sunday after Easter.
For the legions of devotees worldwide of the Divine Mercy, especially among Filipinos (whose Philippine national shrine of the Divine Mercy is located in Marilao, Bulacan), the “Divine Mercy Sunday” liturgical feast is based on the teachings of a Polish compatriot of JPII, the early 20th century nun named St. Faustina Kowalska. Media reports have noted that JPII died in Rome on April 2, 2005, just after a vigil mass for Divine Mercy Sunday; last Sunday, six years later, on the authorization of Pope Benedict XVI, JPII was beatified in Rome on that feast day itself.  It was Benedict's stamp of approval on the interactive relationship between the two Polish spiritual leaders.
XXX


For St. Faustina’s wide following of devotees in the Philippines, it might interest them to follow what John L. Allen, Jr., writing for the National Catholic Reporter” just before the beatification of JPII, wrote about the interwoven facts between the recently Blessed and his Polish compatriot, St. Faustina. Allen wrote how St. Faustina helped influence JPII’s thinking so much, while he gave her the “break,” if one might term it that, to become a major spiritual player by propagating her devotion, popularly known as the “3 o’clock Devotion to the Divine Mercy,” worldwide.
Allen pointed out that JPII was the one who canonized St. Faustina in 2000 and established the Feast of the Divine Mercy that same year (let me stress here that the beautiful Santo Espiritu Church, located just around the bend from St. Peter’s Basilica, was authorized by JP II as the devotion’s “headquarters” in Rome). An artistic rendition of the painting of Christ as he appeared in her vision is now known and revered world-wide, depicting Him with two rays of light streaming from His heart---the red ray representing the blood flowing from His side as wounded by a lance, and the white the water.
Allen cites how Fr. Slawomir Oder, the postulator of the Vatican for the sainthood cause, has written that of the thousands of men and women of God that JPII had beatified and canonized in his 27 years in the Papacy, the second-longest reign of any Pope, “the figure most dear to him was probably the Polish sister Faustina Kowalska, apostle of the Divine Mercy devotion.”
XXX

Sr. Faustina, daughter of an impoverished peasant family of ten children in Poland, died of tuberculosis in 1938 at the age of 33, after undergoing a life of incredible spiritual and earthly experiences. The earthly side included seeking work as a housekeeper to support her family and later, at the age of 20, entering a congregation of sisters to serve as helper, cook, gardener and porter in the convent. But as writer Allen noted, “That surface quiet, however, masked a remarkable interior life.” 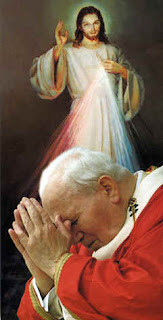 Writer Allen wrote that JPII was “palpably, unmistakably devoted to Faustina and her message, for a number of reasons. For one thing, her life story (perhaps including her mystic visions) had appealed to his “strong mystical sense” as early as when he was a young seminarian. For after all, he wrote, once upon a time JPII had contemplated a vocation as a Carmelite because he was impressed with the great Carmelite mystic St. John of the Cross and his mystical theology.
Then too, said Allen, it always struck John Paul as “deeply significant” that Faustina’s diary and its message of mercy were revealed between the two World Wars, “as the two great tyrannies of the 20th century were taking shape: Nazism and Communism.” As the writer put it, “To John Paul, it seemed that in that historical hour of supreme mercilessness, God had reminded humanity of the only real alternative---an insight that became part of the basis for his own spiritual resistance to totalitarianism.”

Finally, “the fact that God chose a daughter of Poland also could not help but capture the imagination of John Paul II.” For as Allen put it, “Despite becoming a citizen of the world, John Paul famously remained attached to his Polish roots, and his enthusiasm for Kowalska and the Divine Mercy devotion is also an expression of that national pride.”


Interestingly, however, for almost twenty years, from 1959 to 1978, as Allen noted, Faustina’s diary and her divine mercy devotion were officially banned by the Holy Office, the earlier counterpart of today’s Congregation for the Doctrine of the Faith. In fact, the writer cites historian Andrea Riccardi as saying that it was the legendary Cardinal Stefan Wyszinski and a few other Polish bishops who pushed for the ban on Faustina’s diary because they found some of her claims “tough to swallow.” Moreover, the artistic rendition of the Divine Mercy’s Jesus Christ, with the red and white rays streaming from His heart, the very colors of the Polish flag, also put some Polish bishops in some sort of quandary vis-à-vis the ruling Communist regime.
XXX
But it appears that John Paul from the start had no problem accepting Faustina’s visions and devotion to the Divine Mercy even when he became an auxiliary bishop in Krakow. In fact, noted Allen, when he became Archbishop of Krakow, “it was a minor bit of defiance” when he opened canonization proceedings for Faustina on Oct. 21, 1965, considering that her lifework was “still officially censored in Rome.” Allen noted that the ban on the Divine Mercy devotion was not formally lifted until April 15, 1978, just six months before the Polish Karol Wojtyla became pope.
After his election as Pope, the rest was history as far as Sr. Faustina was concerned---he beatified her in 1993 and canonized her in 2000, making her the first saint of the new millennium. That same year he established “Divine Mercy Sunday” as a feast of the universal church every second Sunday after Easter.
XXX

John Allen Jr. noted that both the Divine Mercy devotion and JPII’s powerful attachment to it had their critics. Some felt that Sr. Faustina’s insistence on human unworthiness was excessive, while others objected to the way the Divine Mercy feast was placed within the Easter season, hence “disrupting” the peak period on the liturgical calendar. Others felt the pope shouldn’t have used his office to foist his “personal spirituality” on the rest of the church.
Allen wrote that JPII was aware of the criticisms, but pushed ahead anyhow, for reasons noted above. All this, he stressed, “goes to show that even John Paul II, who had no problem exercising authority when he felt the situation called for it, was also capable of subtly pushing back when he thought it was wrong.” That too, he said, “is part of the John Paul legacy.”
(Next: Had JPII become a Carmelite priest, he probably wouldn’t have ended up as Pope and Blessed).
﻿
Posted by Veteran Journalist and Relentless Advocate of Truth at 1:03 AM