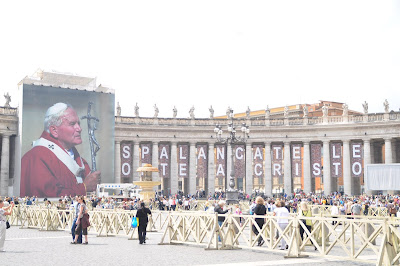 ----The Italian capital is flooded with photos of the smiling, rather chubby face---under streetlights, plastered on walls everywhere and in myriad shops selling souvenirs of this celebrity. John Paul II is the city of  Rome’s poster boy, his full masculine face beaming down on a shy fair-haired boy or looking at his flock eye to eye, beckoning them to  come try the waters of Christianity and faith. It’s a robust face and figure, captivating and enthralling, bringing back memories for everyone of a much-loved persona, and not the bent, sickly old man bodily rendered wretched by Parkinsons’ disease, that the world commiserated with toward the end of his 27-year reign on the Throne of St. Peter.
But actually it is the two images---the dynamic and charismatic leader of the world’s Catholics who attracted the youth of the world like a Pied Piper, as well as the bent old man in his ‘80s, devastated by pain and disease, who taught the world how Christian suffering should be a union with Christ on the Cross---that made him one of the best loved Popes of all time. And also one of the fastest to be raised to the altar of the Blessed ---only six years after his passing on April 2, 2005.
XXX 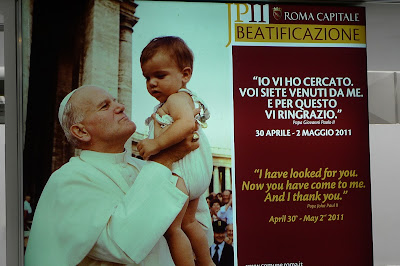 The City of is said to have spent 6 million euros for the beatification of JPII tomorrow morning at the gigantic square in front of St. Peter’s Basilica. Preparations are elaborate for the three-day festivities that will mark this historic event. All over the city information tents went up manned by hired hands dishing out all manner of information to the hordes of pilgrims who have   descended on from land, sea and air. Over the past three days these pilgrims have been moving around, led by leaders with the ubiquitous flag, doing all the holy sites of Christian Rome as a build-up to the big event. For pilgrims and locals who won't be accomodated inside St. Peter's Square tomorrow, the city government has set up many giant TV screens all over the city.

JPII's devotees have gathered at the Square which is dominated by a photo of JPII as tall as a small building. It depicts him deeply tanned and healthy (perhaps taken late into the first decade of his 27-year reign), seemingly looking pensively into the future of a pontificate that would eventually be confronted  with  serious problems. Beneath his gigantic photo,  the pilgrims form long snaking lines to enter the cavernous basilica, braving the increasingly scorching heat of the spring sun.
Over the past days various churches in this city of a thousand churches have opened their doors to accomodate the continuing streams of people and some have put up their own exhibits of JPII memorabilia. Tonight the churches will keep  all-night vigils in preparation for tomorrow’s momentous event. And in St. Peter”s Square it could be sleepless in for multitudes who will already camp out there in the hope of securing the best spaces for the beatification (behind the Vatican walls, rows and rows of portalets are ready for them).

But it will be at the Circus Maximus---the huge arena in the ancient part of Rome, which is best remembered for the chariot race between Charlton Heston and Stephen Boyd in the all-time classic movie, “Ben Hur”---where the  mammoth crowds, especially the young people from around the world, are expected to keep an all-night candlelit vigil tonight. They'll be praying and giving testimonies of JPII's love and generosity, while the youths will be singing and strumming guitars,  much as they have done in jammings with JPII during his visits around the world.
XXX
But the most exciting part of the beatification rituals in these three days involves JPII's relics. A few days ago, his casket was exhumed from  the papal crypt beneath the cavernous basilica. As the world learned from his funeral, popes are buried in three caskets: a wooden one which is slipped into a bigger lead casket and finally into a third wooden casket.  Starting tomorrow, however, JPII's casket will be transferred to the basilica, in front of the elegant Bernini baldacchino, and after the beatification rites, Pope Benedict and the cardinals and bishops will venerate his remains, followed by the public who will be allowed to file past the bier. In the next few days JPII's casket will be moved to beneath the Altar of Confessions, not far from Michaelangelo's famed Pieta.  Will his remains eventually be exposed to the public, as those of another pope, Blessed John XXIII, are? Only time will tell.

Another ritual tomorrow will be the presentation of a vial of blood from JPII, contained in a precious reliquary and declared as his true relic. It will be presented jointly by a youth, Sr. Tobiana, who had served in JPII's apartments, and Sr. Marie Simone-Pierre, the French nun whose cure from Parkinson's disease is attributed to JPII's intercession. I learned from our longtime family friend, Jesuit "Church historian" Fr. Jose Quilong-quilong that JPII's blood was collected before he died, and in fact another vial is to be sent to his native Poland.
XXX
The frenzied excitement in is understandable, for JPII was the second-longest reigning Pontiff in Church history and perhaps the best loved. Only five years ago, in his funeral attended by over a million people, including his fellow Poles (as well as this blogger, then a columnist of the Inquirer, my dzRH partner Cecile Alvarez and then PMS Chief Cerge Remonde; we tagged along with the small presidential party of President GMA to the funeral) the repeated cry from the vast throngs was “Santo Subito” or immediate sainthood. Pope Benedict XVII, formerly Joseph Cardinal Ratzinger, JPII’s closest associate and adviser, who was subsequently elected as JPII’s successor, harkened to the plea of the mammoth throngs. 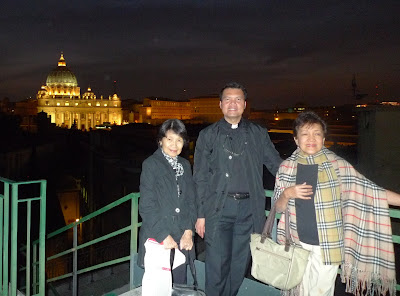 Over the past five years, as Fr. Quilong-quilong, who has been  assigned as a ranking official of the Jesuit curia here in Rome in the past eleven years, but who will assume rectorship of the Loyola House of Studies in the Ateneo Campus late next month, noted, the path to JPII’s sainthood was laid down surely and unerringly.  In fact,  Quilong-quilong, who has a very keen bent for Church history (and perhaps could be persuaded to teach it as a subject for lay people when he returns to the Ateneo Campus) pointed out that Fr. Slawomir Oder, the postulator of the Holy See office for the cause for sainthood, had submitted six thick volumes that dealt with three aspects: JPII’s early life, his Papacy and its impact on the world (such as his efforts to strengthen dialogue among the various Christian faiths), and the ramifications of his death on the world, including miracles attributed to him.


XXX
Fr. Quilong-quilong pointed out that indeed JPII’s beatification tomorrow has broken many records in an institution heavy with millennia of history (hence the justification for all the hyping over him---BOC). JPII is the first pope in a thousand years in the Church to be beatified by his immediate successor, says Fr. Quilong-quilong, but as Blessed, he will be only one of ten popes declared as such in the past 500 years, while only two popes have become Saints in these 500 years, namely Popes Pius VI and Pius X (the latter was the pope who proclaimed the dogma of the Assumption of the Blessed Virgin Mary).

JPII's beatification was criticized in some quarters as "too fast, too soon" but critics also ascribed it as the handiwork of his former closest adviser, now Benedict XVI. In other words, in JPII's case it was favoritism. But Benedict chose to ignore the critics and went ahead with his desire to beatify JPII, stressing the latter's  life of holiness. To become a saint, Blessed John Paul II needs another indisputable miracle. Who knows, says Fr. Quilong-quilong, perhaps we might have a canonization next year.
For comments/reactions, pls. email:
polbits@yahoo.com
Posted by Veteran Journalist and Relentless Advocate of Truth at 2:09 PM