Judge Villarosa of Makati RTC should inhibit himself in Revillame case

The Supreme Court decision to acquit the group of Hubert Webb leaves a trail of happiness, sadness, bitterness, perplexity, doubt and a whole gamut of other emotions. The High Court’s majority absolved Webb et al because of a “lingering doubt” about the “confused” and "incoherent" testimony of star witness Jessica Alfaro in the grizzly murders of nearly 20 years ago.
I can only feel real pain for my friend Lauro Vizconde who has obviously not recovered from the murders of his beloved wife and two daughters, despite the long passage of time. One can see this pain in the innermost depths of his eyes when one talks to him. Yet, I can imagine the unspeakable joy of the Webbs this Christmas season, as they are a whole family again. Such is life.


Why did this case take so long?
But two questions will linger long after this SC decision fades from the headlines. One is, why did this case of three brutal murders take so long (in June 2011 it will be 20 years) to resolve? This is one area that our justice system really has to work hard on---how to speed up cases. Webb et al. spent 15 long years in prison, only to walk out free men by a technicality. The next question is, if Webb et al. did not commit those murders, who did? There must be people walking around who should be behind bars forever. The brutal murders cry to high heavens for justice.


Comelec replacements
The buzz in the grapevine is that among those being considered to replace resigned Comelec Chair Jose Melo is another justice who’s retiring mid-year next year---Associate Justice Antonio Eduardo Nachura.

In the SC Nachura, a former congressman and solicitor-general, has exhibited a lot of independence. For instance, despite his vigorous defense of winning candidate Gloria Macapagal Arroyo in the congressional canvassing in 2004 against FPJ, he voted to uphold the constitutionality of the Truth Commission that proposes to investigate the scams under the Arroyo administration.
One thing good about Nachura is that he knows the ins and outs of election laws, so that tricky election lawyers and wily insiders in the Comelec cannot spin him around like a top. But he may be just a wee bit too old for the top post in the poll body that will demand a lot of vigor and energy for the incumbent to be effective.


Question of impartiality
The lawyers of TV5 host Willie Revillame are absolutely right in demanding that Makati City Regional Trial Court Presiding Judge Joselito Villarosa inhibit himself from the copyright infringement case filled by ABS-CBN network against Revillame and TV5. Revillame’s lawyers fear that Villarosa cannot be impartial in his judgment of the case, as documents prove that he got his appointment as RTC Judge (albeit in San Jose City) in 2004 through then chief presidential legal counsel Joe Nathan Tenefrancia.

Since then Tenefrancia has become a partner of the CVC Law Firm, better known in legal circles as “The Firm,” which is now representing ABS-CBN in its nearly half a billion peso-law suit against Revillame. It is no secret in the legal community that “The Firm” is extremely well-connected, as its top honchos had served in the Ramos and Arroyo administrations and reportedly made sure their people were assigned to various salas and as fiscals in the DOJ.

Given the kind of power-play The Firm is used to,and the high-stakes game between the two networks, Judge Villarosa should inhibit himself and raffle this case off to someone else.


Ratings problems for ABS-CBN
Revillame’s program doubtless is giving ABS-CBN ratings problems in the 6:30 pm. time slot occupied by “Radyo Patrol,” so much so that ABS-CBN had to throw its top-notch broadcasters into that news program, namely, Noli de Castro, Korina Sanchez and Ted Failon. But eating up a huge chunk of audience “Willing Willie” does, and one reason may be the recruitment of ex-Noynoy girlfriend Shalani Soledad as Revillame’s co-host. It’s a master-stroke said to be his idea entirely.


Shalani in person
Last Monday my husband and I happened to ride with Shalani Soledad on the same plane from Guangzhou, China, where my husband had his regular cancer treatment. While waiting for our bags in Naia 3, I chatted with Shalani. With no make-up at all and dressed in jeans and sweaters, she’s indeed prettier in person, tall and svelte, with finely-chiseled porcelain features. Shalani recalled that I had written about her twice and thanked me for them. I had quoted in this blog TeddyBoy Locsin’s hyperbolic remark about how Shalani in her yellow terno at P-Noy’s Luneta inaugural was the “most elegant woman I have ever seen." No doubt, the gal has class.

Shalani confessed to this writer that she’s getting used to the klieg lights and is now more comfortable with huge audiences; but her combination of demure shyness and increasing ease is, I think, what clicks with the crowds (especially the men-folk) who simply go gaga when she comes on stage.

Our beautiful country (or “Pilipinas Kay Ganda,” as an advertising promo that the Department of Tourism threw out a few weeks ago billed it) needs international promotions badly, as two Filipino tourists came to realize recently. Thus it’s a pity that the DOT has such a minuscule budget of P1.4 billion. If we are to adequately compete with other countries that are advertising heavily in the international media networks, we have to spend.

My son Conrad and his wife Myra last month joined a group tour of Turkey organized by Turkish Airlines and the glossy, proudly all-Pinoy but international-standard travel magazine called “Travelife.” After Turkey the two flew on to neighboring Greece for another week of vacation-cum-belated honeymoon, and at the Athens airport lounge they came upon this glossy magazine called “2 Board,” which labels itself as the “Official Athens International Airport Magazine.”

The magazine published a contest where readers from all over the world may cast their vote (deadline last month) for seven winners from among 28 world finalists, in what was billed the “New 7 Wonders of Nature” competition. The Athens airport magazine devoted generous pages with gorgeous photos to the finalists that included such renowned wonders as the Grand Canyon of the USA, the Iguazu Falls of Argentina-Brazil, the Black Forest of Germany, Mt. Vesuvius of Italy, the Great Barrier Reef of Australia, Kilimanjaro of Tanzania, the Table Mountain of South Africa and Halong Bay of Vietnam. 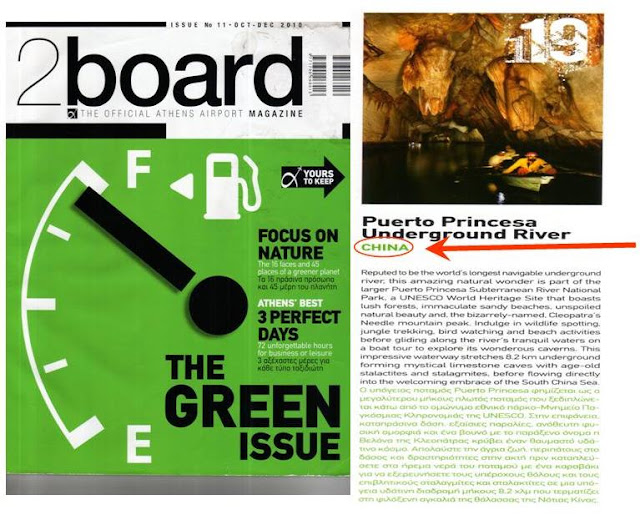 Conrad and Myra were happy to discover that among these 28 finalist wonders was our own Puerto Princesa’s 8.2 km. “Underground River.” The Athens magazine touted it as “reputed to be the world’s longest navigable underground river,” part of the larger Puerto Princesa Subterranean River National Park, a UNESCO World Heritage Site that “boasts lush forests, immaculate sandy beaches, unspoiled natural beauty and the bizarrely-named Cleopatra’s Needle mountain peak.”
Conrad felt a little aggrieved that the photo of the Underground River was much smaller compared to the other world wonders, but it was good enough that our entry was included. But woe of woes! It was wrongly listed under China and in fact was the only entry of that country. Paging DOT Secretary Bertie Lim. Let’s get on with your promo, but this time please do it right.


Confusion over shortcuts
But before anything else, Mr. Secretary, can we get our country’s name right? Two major newspapers are in conflict in referring to the abbreviation of Philippines---you know, like those of the USA or UK. One paper shortcuts it to “Ph” while the other one terms it “Phl.” Now, if those two giant media outlets can’t get the Philippines’ abbreviated name right, what foreigner can? In the first place, though, why change RP, which for so long has stood for “Republic of the Philippines,” to Ph or Phl? As they say, if it ain’t broke, why fix it?


Do you have a comment?
Email Bel Cunanan at
polbits@yahoo.com
Posted by Veteran Journalist and Relentless Advocate of Truth at 3:22 PM