President Aquino and Bangko Sentral ng Pilipinas officials have justified the numerous errors appearing in the new bills, the legal tender of the Republic, by saying that “some degree of artistic license” was exercised by the designers in view of the “finite space” in the bills. But for thinking citizens, the answer to this is, why pack so much detail into those bills, to the point where design as well as accuracy have to be distorted?

Critics from various professions have lamented errors in the new bills, such as the exclusion of Batanes, one of the leading tourist spots in the Philippines, from the map, and the misplacement of equally prominent tourist spots such as the Tubbataha Reef and the Palawan Underground River.

Members of the Wild Bird Club of the Philippines deplored the depiction of  the rare native blue-naped parrot’s beak in yellow instead of nature’s red (in keeping, daw, with the note’s yellow background) while its tail feathers were changed from yellow to green. On this issue of changing the parrot’s beak’s color, however, my take is that this may be just another case of simple pag-sisipsip to the Yellow President, instead of artistic license.

Recall how two years ago, singer Martin Nievera was heavily castigated, and almost jailed for having exercised “artistic license” in his busty rendition of the National Anthem at the opening of a Manny Pacquiao boxing fight in Las Vegas, where Nievera let his ending notes soar to the stadium’s rafters. Since the singer’s unfortunate brush with conservative elements, legislators have compelled that the Anthem scrupulously hew to the traditional rendition, which can be ho-hum.

BSP officials have stressed that the designs used in those new bills were the product of three years’ research work and consultation with various authorities; but so was the impaired work that went into the “Pilipinas Kay Ganda” promo project of the Department of Tourism, which it was force to junk after it kicked so much public uproar. Unfortunately the BSP cannot withdraw those bills as it would be too expensive to do so.


Form of artistic license
The President justifies the errors in the six new denominations, such as moving Tubbataha Reef by some 400 kms. from the Philippine coastline and closer to Malaysia, and deleting Batanes from the map, as exercise of “artistic license.” Ngayon pwede na ang artistic license because he says so, but think that those notes are going to be around far longer than the memory of Nievera’s stirring rendition! Moreover, these are official notes of the Republic, not some mickey-mouse club.

My question is, why cram so many details in these official notes of the Republic, so that accuracy and correctness have to be sacrificed?  It’s a question of values and priorities. Kung pwede na kahit mali-mali, how can we teach our young people to strive for excellence and the correct way to do things?

If pwede na characterizes the mentality of this administration, it’s no wonder its E0s get snagged in the Supreme Court.

The 30-second teasers appearing in various TV channels about a forthcoming local film starring veteran comedian Dolphy, that shows the desecration of the Eucharist, comes at a very sad occasion---Christmas time, when the Christian world commemorates the birth anniversary of the Child Jesus in Bethlehem. In the belief of Catholics, who constitute the greater part of Christendom, the Eucharist, or the Sacred Host or Holy Communion, as it’s more popularly known, is the very same body of  the Christ born in Bethlehem over 2000 years ago and who later hang on the Cross to redeem mankind.

Thus, when the movie titled “Father Jejemon,” which will be among the  entries to the Metro Manila Film Festival that ironically opens on Christmas Day, it will be a grave affront to the religious belief of Christians, especially Catholics. We must protest this insult, and the Film Festival itself must not allow the film to participate until rectification is done.


Offensive to Catholic sensibilities
The movie teasers showed scenes that offend Catholic sensibilities, such as when the priest, played by Dolphy, accidentally drops a sacred host into the cleavage of a female communion receiver; or when it gets stuck in the denture of a senior citizen. Those scenes were designed clearly as comic props, but unfortunately they also make fun of and satirize a deep Catholic belief, in utter poor taste and disrespect to a religion.

In real life, when a priest drops the Host accidentally in the course of distributing it, the practice is for him to pick it up right away and partake of it himself. In some areas, until now they cover the actual ground on which the host had dropped. To receive the Eucharist, the faithful are encouraged to be in a state of grace.

That’s how sacred the act of receiving Holy Communion is to Catholics.


Why was the film approved?

The question is, why did the MTRCB, headed by Grace Poe Llamanzares, allow these scenes to pass in the film that’s going to be watched by this predominantly Catholic nation?  She was quoted in media as saying that the  MTRCB Board has called for a second review of the film, after the uproar its 30-second TV teasers have kicked up. But this raises a second question: why did it approve those teasers for general patronage and nationwide TV?

Moreover, the film producers, RVQ Productions, now say those two offensive scenes have been cut, but we all know that in the provinces cut portions are oftentimes restored and shown to the public.

The MTRCB Board, led by Llamanzares, should account for this incredibly poor lapse in judgment. No wonder Standard columnist Emil Jurado has called for its abolition for being “useless.” 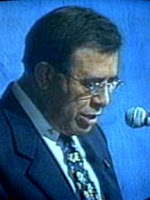 Former MTRCB Chief Manuel Morato was besieged by angry callers and texters after followers of healing priest Fr. Fernando Suarez circulated texts about these insulting scenes. Morato, who served as censors chief in President Cory’s time, opined to me that there is a presidential decree, P.D. 1986, which prohibits any show of disrespect to any religion. He stressed that during his term at MCRTB’s helm they observed this practice, and this could now be invoked by those who are affected by this film, as the P.D. remains part of the law of the land.

This is one Marcosian PD that I certainly agree with, for we ought to respect all religions even if we do not adhere to their teachings, and not make fun of  religious beliefs. The producers of this film are lucky they are not in a closed Muslim society, for they would never come out alive with such an insulting film.


Disappointed over Dolphy
Frankly I’m quite disappointed with the multi-awarded Dolphy.  I used to assiduously follow his comedies in the past, especially the radio-TV series “John en Marsha,” that he did with the equally great Nida Blanca in the ‘60s. I admired his incredible sense of timing that gave his wise cracks their inimitable impact. How he could have consented to such offensive scenes in “Fr. Jejemon” when, by his own admission, he could be meeting his Maker any time, is sad, truly sad.

As Fr. Suarez put it so well, “The King of Comedy should not insult the King of Kings.”


Do you have a comment?
Email Bel Cunanan at
polbits@yahoo.com
Posted by Veteran Journalist and Relentless Advocate of Truth at 3:38 PM