In recent weeks floods have afflicted Pakistan, India, China, Thailand and even RP’s own Isabela province, as well as in other countries on the other side of the world. Scores of lives have been lost, thousands were rendered homeless and property worth many billions destroyed. Ironically enough, in the wake of all the floodings, plus recent earthquakes and the ongoing volcanic eruptions in Sumatra, the world will be celebrating “Climate-Change Consciousness Week” from Nov. 19-25. 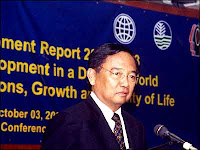 In this light, we thought it best to guest on our regular Sunday dzRH program Mr. Climate Change himself, vice-chair Heherson Alvarez of the Climate Change Commission (President Aquino is the CCC Chair), so we could discuss what’s causing the great floods around the world and how best to tame those wild rivers in our country (catch it tomorrow night on dzRH from 8-8:45 pm).
Our chat was very timely too, since a big conference on “risk reduction and risk prevention” opened yesterday, Friday, in Albay and continues through this weekend, attended mainly by governors from around the country who, after the recent 260 kph-power packed by typhoon “Juan,” are now most seriously concerned about mitigating disasters in their areas.


Floods caused by the great rivers
Alvarez, who hails from Isabela in the Cagayan Valley, which has been stricken with huge floods in recent years, cited the great rivers of the world that are causing them---the Ganges River in the India-Pakistan area, the Yangzte River in China, the Mekong in the Thai, Cambodian and Vietnamese areas. Much of the flood problem in the Asian continent in recent years, he stressed, is caused by the melting of the ice caps in the Himalayas as global warming increases.

Here at home, Alvarez noted that the 25, 469 sq. km. Cagayan River, the country’s longest, is the life support for the Cagayan Valley’s rich agricultural lands, which in turn, supplies l/3 of the country’s grain requirement and 40 percent of Metro Manila’s supply. But he stressed that this big river system has to be managed, together with the other twelve major river systems in the country, among them as the Marikina River of “Ondoy” fame that wreaked havoc on the metropolis, so that destructive annual floods brought about by climate-change triggered typhoons do not continue destroy lives and our agriculture.


The role of forests in flood preventon
Alvarez, whose CCC is in charge of coordinating RP’s programs and projects on climate change, stressed that once upon a time, our forests served as “huge baneras” to hold cascading waters when the typhoons used to run at 150 kph. But because our forests have been denuded over time and typhoons now strike at 250 kph, there’s now need to build “protective measures” and “defense mechanisms.” Among them, he stressed, are “impounding systems” along the rivers, which are like mini-dams or water sheds that could divert and hold water during the rainy season so as to prevent the disastrous overflowing of the rivers; but during the dry season, these mFini-dams could serve as irrigation basins to address severe droughts that kill agriculture.
But Alvarez explained that other bodies of water in this country also need management, especially Laguna de Bay, which has some 27 towns around it.  He cited how the 52-km. Han River in Seoul has become a model of urban development, creatively combining subdivisions and water management.


Funding needed to finish project
He stressed that work on the Cagayan River basin program has begun, but he  admitted that this would need plenty of funding to finish. He pointed out, however, that there are funds that the country could avail of for such projects. One is the $30 billion Fast-Start Fund under the auspicious of the United Nations Framework Convention on Climate Change (UNFCCC), which the Philippines is qualified to gain access to, in support of its adaptation programs for vulnerable communities affected by global-warming. Alvarez said RP’s appeal for this particular fund is being negotiated, with the Land Bank to serve as its fiduciary vehicle.

The task of risk reduction and risk prevention was uppermost in the minds of the Asean leaders in their recent Summit in Hanoi, and it will continue to be among the top agenda in the Global Summit in Cancun, Mexico next month, and all through the next one in South Africa in 2011. This is as it should be. As nations continue looking for lasting solutions, they will continue fighting and pointing fingers at one another; meanwhile peoples will continue trying to survive each environmental crisis that seems to get deadlier by the year.

The other half of the Alvarez power couple, Cecile Guidote-Alvarez, president of the Philippine chapter of the International Theater Institute, had handled the planning and preparations for the highly successful “Dia del Galeon,” early last month, in coordination with the Unesco and the NCCA. Unfortunately I was in Guangzhou at that time to accompany my husband for his treatment at Fuda Hospital, and so I missed all the festivities, beginning with a visit to the beautifully crafted replica of the galleon of old, the Galeon Andalucia, that had sailed from Seville via Acapulco to Manila.

Over radio, Cecile and I recalled the highlights of that festive interaction between the three Hispanic relations---Spain, Mexico and the Philippines---and the prime importance of the port of Manila in world maritime trade and the launch of Filipinos as a sea-faring power. But what I liked most---and unfortunately, what the media had failed to highlight---were the “close encounters” between historic religious images.


Encounter with the Black Madonna
As Cecile recounted it, Manila Archbishop Gaudencio Cardinal Rosales celebrated a Te Deum at the Manila Cathedral after the Galeon Andalucia successfully docked at Pier 13. Part of the celebration was that the image of the black Madonna, the “Nuestra Senora de la Paz y Buen Viaje,” would journey down from the hills of Antipolo to meet her guest, the “Nuestra Senora de Esperanza,” whom the sailors of the Andalucia had brought with them from Seville to ensure a safe journey across the ocean.

Few would probably recall that the much-venerated Virgin of Antipolo had once also been brought here safely aboard another Spanish ship four and a half centuries ago, so that she became for Filipinos down the centuries the patroness of safe voyage. At the Manila Cathedral, the two Virgin images stood side by side as hymns of thanksgiving soared to its rafters.

A few days later the Andalucia sailed for Cebu, and this time the “host” to meet the Esperanza was the image most beloved by the Cebuanos, the Sto. Nino de Cebu. History tells us that it was brought here by another conquistador four and a half decades earlier, Ferdinand Magellan and gifted to the native Queen Juana; this gift, accounts say, became quite instrumental in the queen’s conversion.

Do you have a comment?
Email Bel Cunanan at
polbits@yahoo.com
Posted by Veteran Journalist and Relentless Advocate of Truth at 4:57 PM