I caught former Sen. Rene Saguisag the other day on Channel 5 commenting on the Truth Commission chaired by former Chief Justice Hilario Davide Jr. I’m glad to note that Rene, who served as President Cory Aquino’s chief legal counsel in the early months of her presidency before he ran for his one and only term in the Senate in 1987, has not lost his acerbic wit. He opined that the Commission, which was set up by EO No. 1 by President Aquino to investigate the alleged wrongdoings of the previous Arroyo administration, would be a “toothless tiger as it does not have enough powers. Proof, said Rene, is that it cannot even subpoena witnesses. He opined that given this reality, the Commission would just be an added layer to existing government prosecutorial agencies, such as Department of Justice and the Office of the Ombudsman.


True purpose of Truth Commission
I quite agree with Saguisag. Of what use will the Truth Commission be, other than to try to propagandize alleged excesses of the previous administration, in fulfillment of Noynoy Aquino’s campaign promise to put GMA behind bars, or to distract the citizens from the shortcomings of the current dispensation?

I recall that the first EO signed by P-Noy’s mother, Cory Aquino, set up the PCGG to run after the hidden wealth of the Marcoses and their cronies. But while the PCGG was endowed with so much power by the new government, it succeeded in recovering only P85.7 billion in cash since Feb. 26, 1986 up to the present, and many more billions in bank deposits and assets remain under litigation mostly abroad. Many more Marcos assets perhaps remain unknown to the PCGG until now.   These problems may be attributed to the brilliant lawyers of the Marcoses and their cronies, who employed all manner of delaying tactics in court, as well as to the PCGG's own saga of foibles and corruption. The question is, would the Truth Commission do any better in its target investigation of 23 corruption cases in the Arroyo administration within its two year-timetable (until December 2012)? Given the lack of subpoena or contempt powers (GMA has invoked the right to remain silent) and the advanced age of the three justices at its core, how effective can the Commission be?


Issue of jurisdiction of the Truth Commission 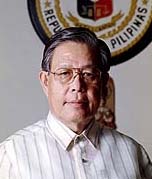 At a recent press conference the Truth Commission’s chief, former CJ Hilario Davide, emphasized that his group is just a “fact-finding body and not a prosecutorial one.” Listening to him, one could read what was going on in the minds of the media interviewing him and his colleagues. A media guy, for instance, queried what would happen if the President were to reject the findings of this Truth Commission, similar to his discarding major recommendations of the fact-finding Incident Investigative Report Committee (IIRC) that Justice Secretary Leila de Lima headed to investigate the Luneta hostage-taking fiasco, to the dismay of even P-Noy followers. Davide replied that his committee would submit its findings to the Office of the President but he acknowledged that the OP also has no prosecutorial powers, unless the official under investigation has to be dealt with administratively, in which case it can fall under OP’s jurisdiction.

Beyond this, jurisdiction of the Truth Commission is not clear. But of course, its first hurdle is whether the Supreme Court would declare as constitutional the presidential decree creating the Commission, as it has been challenged by leading House allies of GMA. Given the SC’s current sour mood against the P-Noy administration, judging from a series of decisions lately (such as the status quo ante order on Omera Dianalan-Lucman’s appointment as chief of the National Commission on Muslim Filipinos by GMA), I wouldn’t be surprised if the court axes the Davide panel. 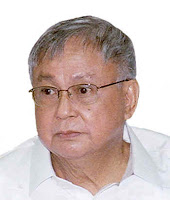 I had earlier noted that some of the leading critics of President Noynoy had once served his mother, among them Rene Saguisag, Winnie Monsod and former Constitutional Commission member and later Comelec Chair Christian Monsod. Sen. Joker Arroyo seems squarely in this group, judging from recent pronouncements. Recently Joker criticized the presidential grant of amnesty to former military mutineers and was quoted as saying that he wasn’t overly eager to welcome his fellow senator Antonio Trillanes to their chamber. He opined that the amnesty grant, which under Sec. 19 of Art. VII of the Constitution needs the concurrence of majority of both chambers of Congress to have the force of law, “has trivialized the justice system.”

Arroyo was referring to the fact that Judge Oscar Pimentel of the Makati Regional Trial Court Branch 148 has set the promulgation of his decision on the Oakwood coup attempt of July 2003 by Trillanes and his fellow Magdalo mutineers for Oct. 28. Now comes P-Noy’s sudden decision to grant amnesty to them. This now opens the question of what would happen if Judge Pimentel were to rule that the mutineers are guilty and imposes a sentence. Suppose Congress rushes the resolution of concurrence, but Pimentel rules the mutineers guilty? I wouldn’t be surprised if this judge won’t be cowed: he has a reputation for being a maverick.


Problems of amnesty
Webster’s dictionary defined amnesty as “official pardon for people who have been convicted of political offenses,” and the word comes from the Greek “amnestia,” which means “forgetfulness.” In amnesty, the political liabilities are “forgotten” and the pardoned is restored to full civil (and in the case of the military soldiers, not the officers, liberties).

To avoid this conflict between the expected executive/legislative action and Pimentel’s forthcoming judicial action, some officials currying favor with P-Noy have asked the judge to defer his ruling, “out of respect for the executive branch” daw. But isn’t it wiser for the executive to wait for the judge to rule first on this case as after all, it has been pending in his sala for years now, instead of the other way around.

If Pimentel adjudges the mutineers guilty, then the President and Congress could push amnesty without a problem. But if he exonerates them, there’s also no problem as P-Noy’s intention was already telegraphed for good will. But if the Palace and Congress sideline Pimentel's forthcoming judgment and rush amnesty NOW, it becomes problematic for both sides.

Talk circulating in coffee shops is that amnesty was rushed because of reports of military unrest; amnesty was meant as preemptive. This early? Frankly, I don’t give credence to that rumor, as the military seems more inclined toward giving P-Noy the benefit of the doubt than the civilians, a good number of whom he has lost. I think that amnesty was again one of those examples referred to by Joker Arroyo when he shook his head and pointed to his temple, meaning, it was again a no-brainer from P-Noy’s advisers. 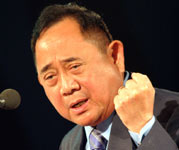 Standard columnist Emil Jurado recently wrote that former Speaker Joe de Venecia’s nomination as Philippine permanent representative to the UN is on the desk of P-Noy. Emil opined that JDV would be excellent for that post as he has such an extensive international network of connections which could be harnessed for our country. I second the motion.

I was able to join JDV over the years in various international conferences, including those of organizations that he founded even while he was out of power, such as the International Conference of Asian Political Parties (ICAPP) that he established in May 2000. I have witnessed the enormous respect and admiration he commands among world leaders in various continents. It would be a pity if these assets JDV has cultivated over the years wouldn’t be harnessed for whatever RP needs: a voice in human rights, international finance (e.g., debt-for-equity swaps in climate change projects), inter-faith dialogue, name it, he will be listened to. P-Noy should appoint De Venecia right away to the UN.

Do you have a comment?
Email Bel Cunanan at
polbits@yahoo.com
Posted by Veteran Journalist and Relentless Advocate of Truth at 4:27 PM