This column has been writing about the 33 miners who had been trapped in a collapsed mine shaft in Chile since last Aug. 5. I had followed their incredible claustrophobic ordeal for weeks and weeks on end and earlier today, when the first eight of them were successfully hauled up in the specially designed “Phoenix” rescue capsule, I found myself crying each time a man would come up, sharing the indescribable joy and relief of their families, as though I were a relative. But I wasn’t the only one transfixed by the rescue when it finally came after weeks of preparations that began last Sept. 17:  the whole world was enthralled as the miners’ story---and hitherto untested rescue mechanisms being put in place---reeled before the international TV networks each day, and toward the countdown, by the hour.


Chile's true grit and determination
Mision cumplida---Chile. The signboard that went up before the world’s TV screens later today, after the rescue of the 33rd miner, Luis Urzua, the shift foreman on that fateful day of Aug. 5, delivered the message of this nation’s true grit and determination to resolve the world’s longest underground captivity. But what the signboard---and the 2000 journalists from 40 different countries covering the rescue could not fully convey--- was the story of human emotion and pathos at “Camp Hope,” such as when the 63-year old Mario Gomez, the oldest and a legend in keeping the group going, sank to his knees upon touching surface, to thank God for his deliverance. But despite the festive atmosphere at Camp Hope as one miner after another surfaced, it continued to be gripped by enormous tension---for any moment, the clockwork precision of the tiny wheel pulling up the long capsule could go awry and some men could remain buried perhaps forever.


A global effort for a dramatic rescue 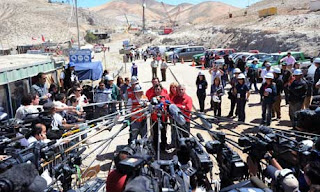 The dramatic rescue was also a beautiful global effort that will rate with the best annals of humankind. After the Aug. 5 tragedy unfolded, Chile quickly united behind the 33 momentarily orphaned families; then, as a nation and a people the Chileans, who had just pulled back from last February's devastating earthquake, rallied behind President Sebastian Pinera’s pledge to rescue every one of the trapped miners. The steadying presence of the handsome Chilean mining minister, Laurence Golborne, the captain of the gargantuan rescue effort, who could well be Chile’s next president given his 86 percent acceptance rating, reassured the world that the Chileans understood the value of teamwork. Pinera is correct: from now on, the world won’t just remember Chile for its excellent wines and its metals, its No. 2 revenue source. Added on is the respect and sanctity it showed for human life—no matter what the cost. We Pinoys could learn a lot from the Chileans.


From around the world
Chile’s determination to rescue its 33 miners touched sympathetic chords around the world. There was the stocky American driller from Denver surnamed Hart, who was pulled out of Afghanistan where he was drilling for water, because he was the most qualified in the world to undertake the extremely delicate drilling through solid rock to make room for the capsule; there were Pope Benedict and other religious leaders praying for all the miners; there were the scientists and doctors from NASA advising the miners on how to cope with their condition, beginning with their rigid diet; there was the California skiing company donating the special “Oakley” sunglasses for the men who endured darkness for 69 days, and so many details big and small of global unity. Later there were the $10,000 bank account for each miner and holidays offered on a Greek island.

For all the divisions in our fragmented world, such as the massive strikes in France, terror threats in Europe and suicide bombings in Afghanistan, once in a while there comes a world-unifying story like the rescue of the 33 miners to stun the most cynical among us all about prospects for world peace and stability.


A lesson in indefatigable hope

But more than anyone, homage should go to the 33 miners themselves---how they never gave up hope and the determination to go on living and coping with impossible conditions in the belly of the earth, without sunlight, with very little air and strict food and water rationing especially in the first 17 days before they made contact with the outside world. When they finally surfaced today, most of them were bubbling with life, halth and energy---just unbreakable! And of course, we have to pay tribute to their families who never gave up on their men with their prayers and their letters. Their own true grit doubtless moved President Pinera to sustain the rescue efforts without counting the costs and against all odds.

The 69-days captivity and ultimate rescue of the miners is an incredible testimony to the unbreakable human spirit. The Chilean group does humanity proud.


A discarded IIRC report
Justice Secretary Leila de Lima was quoted the other day as saying that resignation has crossed her mind after the Palace discarded the recommendations of the final report of the Incident Investigative Report Committee (IIRC) and absolved high-ranking officials whom it had recommended for prosecution. Well, many citizens feel that more than just the thought of resignation crossing her mind, she should, in fact, cross over to the Palace and submit her irrevocable resignation to President Aquino because she seems to have been reduced to being a doormat for Malacanang.


Waste of weeks of effort
First, De Lima’s committee’s painstaking work of many weeks was virtually thrown away by the President who preferred to uphold his long ties of friendship to Undersecretary Rico E. Puno when the more prudent presidential action would have been to just endorse to the state prosecutors and the courts the IIRC’s recommended course of action in the Luneta fiasco. P-Noy took weeks to act on that report and when he did, his main preoccupation seemed to be to take his friend off the hook. Puno even bragged to the media why P-Noy cannot just let him go, and much has been said about his central role in the Aquino campaign.

But in totally absolving him, P-Noy was also forced to absolve DILG Secretary Jesse Robredo of any administrative offense. Recall that he removed police supervision from Robredo at the outset and transferred it to Puno. Analysts are one in stressing, however, that it would have been more politic for P-Noy to have kept a hands-off policy on the IIRC report. Now pundits opine that for all his reformist stance, he seems to be really just a common politico.

Predictably, the Hongkong authorities are upset over his eventual course of action. Now even the media that helped make him president, such as my former newspaper, are calling it a “whitewash.”


DOJ left out of rebels' amnesty grant
Next, Secretary de Lima admitted that on the issue of Proclamation 50, the President’s grant of amnesty to over 300 military rebels who had been involved in three failed uprisings, her department was not consulted at all. This is quite strange, considering that some of those military officials have pending cases before civilian courts. In fact it has been noted that the amnesty proclamation, which has to be concurred in by both chambers of Congress to have the force of law, came about two weeks before the scheduled promulgation of the mutiny case against Antonio Trillanes at the Makati Regional Trial Court. De Lima admitted that she was nowhere in the decision-process regarding the amnesty grant. What is she waiting for?

Do you have a comment?
Email Bel Cunanan at
polbits@yahoo.com
Posted by Veteran Journalist and Relentless Advocate of Truth at 10:19 AM