In the current hearings conducted by the panel headed by Justice Secretary Leila de Lima on the Black Monday crisis, ranking police officers admitted that there was no psychologist trained and experienced in hostage negotiations during the Luneta episode. It has been noted that had there been such an experienced psychologist who had negotiated with hostage-taker Rolando Mendoza, it might have spelled the difference between success or failure in overcoming the crisis, saving many lives as well as our horribly-tarred international image.

Hostage-taking, it has been noted, is an act of desperation and experts point out that “hostage negotiation is all about psychology, and successful crisis negotiators are among the most skilled practical psychologists...” They point to the necessity of marshalling all the tricks in the psychology trade. These include the need to calm down the hostage-taker, to open critical lines of communication with him, to get him distracted and appeased in order to prolong the dialogue and negotiation, enough to enable competent security authorities to execute a successful plan of overcoming the hostage-taker and rescuing his victims.

But in that Luneta episode there were only bungling police agents and even more bungling politicians and bureaucrats. The redeeming thing is that at least one of them, Undersecretary Rico Puno, was candid and humble enough to admit he did not know anything about hostage crises. His admission has brought to the fore the need for a well-trained psychological team in the security forces of government and what it will take to develop such a team to meet the demands of crisis situations.

It’s true that each crisis varies from one to the other in circumstances and there can never be 100 percent assurance that the response would be adequate from the psychological sense, or the military/police end for that matter. Oftentimes, security forces are forced to become on-the-spot psychologists.
But as in everything in life, spontaneous experience is a good beginning, but training makes all the difference. 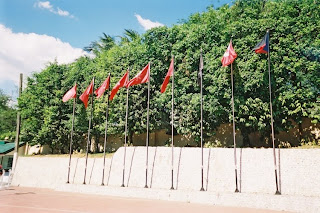 Any housewife who has ever run a household and managed a domestic staff composed of people from various regions of the country and all kinds of temperaments and backgrounds perhaps understands how much mediation can matter in averting a real crisis in her home. Over the past nearly 45 years of being married and raising a family I have had my own fair share of mediation in our daily life---both physical and psychological---between cook and washwoman about to pull each other’s hair, or between the gardener and the driver about to come to blows, etc.  But the biggest lesson in psychology 101 I had to learn the hard---and frightening---way in a small crisis situation that confronted me many years ago, when we were living in Camp Aguinaldo.

The Honasan coup attempt of 1987 had ended with the young rebel flying out of the camp into hiding;  but my husband, then a full colonel commanding the 202nd Brigade of the Second Infantry Division, stationed in Caliraya Laguna, felt that there was still so much tension in the camp that he deemed it wise to leave two soldiers to keep an eye on his family. We had a little bahay kubo outside, on one end of the lawn, and the soldiers slept there and would play cards and tell stories in the daytime.
One day into the first week, however, the two of them quarreled and one ran into the house, quite pale with fright, saying the other guy was out to kill him. He asked me to quickly lock the house.  Peering through the curtains from the living room, I could see the angry soldier outside in his fatigue pants and white T-shirt, his chest crisscrossed with two rows of long bullets, called “bandolero” in soldier parlance, carrying his Armalite with his finger on the trigger. He was pacing back and forth across the lawn, cross-eyed with anger as he tried to search for his arch-back enemy. I sent the children, then quite young, to hide in the laundry area in the rear of the house with the other soldier and our two house-helpers, while I pondered what to do.

Calming down an angry soldier

My first instinct was to call the military police, but if I did that, they’d come swooping down on the house in several jeeps and they’d shoot him down. Cornered, he’d probably shoot at them too--- patay kung patay ---and probably shoot his way through our house, hunting down his enemy and everyone else. There would be killings right in my house. It would be all over the papers. I didn’t want that.
I was so nervous I could have suffocated. But after a few minutes of praying for enlightenment, I felt I had no choice but to get out of the house and talk to him.  I locked the door behind me and in my gentlest voice, but with my knees shaking terribly, I approached him and invited him to sit down with me on the long antique bench in the driveway. At first he didn’t want to come, but I took his hand and ever so gently led him to the bench, his gun still held akimbo. We talked and slowly he poured out his anger to me --- his companion had cheated him in the card game and he vowed to get even. We Muslims do not cheat, he said. Of course you don’t, I retorted.


Putting down a gun

But first, I said, let’s put down your gun so we can talk better. I was sitting very close to him by that time, virtually embracing him and patting him on the head. Neighbors looking out must have been scandalized and some might have thought: why, that crazy woman was carrying on with the young soldier in broad daylight!  Slowly he lay down his Armalite beside him and we continued talking, with me holding his hand and massaging it gently. Then he began to cry like a little boy, and I assured him that I was going to tell Col. Cunanan how bad his fellow soldier was and I guaranteed that his commander was going to punish this rascal. When he calmed down, I asked  him about his folks back in Mindanao.  He began telling me about his father who was a coconut farmer and about his brothers and sisters whom he was helping to send to school with his soldier’s salary.

At that point our driver, Sgt. Fred, arrived in our family car and I heaved a sigh of relief. But then the next worry was, he might see the Armalite and try to get it and that might rouse up the young soldier all over again. I tried to signal Fred with one hand that he should not approach and just stay put in the car, but he couldn’t get the message.  Finally, I got an idea: why not send the soldier with Fred to Caliraya on some pretext. At that time I had already founded the Alay sa Kawal Foundation for the benefit of war widows and orphans, and we were giving out TV sets to various camps. There was one box left inside the house.

I told the soldier, why don’t you go with Fred and present the TV set to Col. Cunanan yourself, and tell him all about this bad guy who cheated you, so he gets punished right away. Mauna ka nang mag-istorya ki Sir. He lighted up. But first, I told him, let’s put your Armalite inside the car as you’ll need it for security---lots of NPAs in Laguna. I picked up the gun and handed it to Fred and motioned him to lock it up inside the car. Then within earshot of the soldier, I told Fred to run inside to get the TV set for the Caliraya camp.

While the soldier completed his uniform in the bahay kubo, I whispered fast to Fred about the little crisis we had and how he should just keep the soldier in good humor all the way. Buy him something nice to eat, I said. They were off quickly and I phoned my husband about what had happened. In the process I became quite angry that he’d leave a crazed guy like that with us. Then I collapsed on the sofa.


Do you have a comment?
Email Bel Cunanan at
polbits@yahoo.com
Posted by Veteran Journalist and Relentless Advocate of Truth at 8:46 AM