A peep into the Muslim world 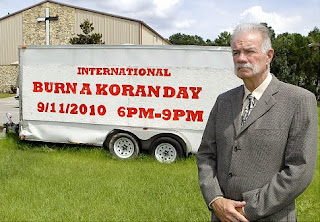 The Holy Month of Ramadan came to a dramatic close abroad last Sept. 10 with tensions provoked by the insane plan of Pastor Terry Jones of a small church group in Gainesville, Florida, to burn hundreds of copies of the Koran on the 9th anniversary of the Sept. 11 attacks in New York and Washington. Jones planned the burning to protest the plan of an American-Muslim couple promoting interfaith dialogue to construct a Muslim cultural center and mosque, called “Park51,” two blocks away from Ground Zero in New York City. This was the site of the World Trade Center that was bombed and destroyed by Muslim extremists in 9/11.

Jones demanded that the project be moved elsewhere or he would go on with his plan to burn Koran copies.


Protests from around the world

His threat drew howls of protests from around the world for its bigotry and religious intolerance. President Obama appealed to the pastor to abort his plan, as Gen. David Petraeus, top commander of US armed forces in Afghanistan, warned that the Koran-burning could trigger retaliatory attacks on the forces out there. Jones’ move, however, also helped fan demonstrations against the project from those who feared that setting it up right near Ground Zero would offend families of the nearly 3,000 people who were killed there in 9/11. Politicians who had earlier supported the mosque project fell silent after protests against it grew.

Thank God Jones did not push through with his move, but as Ramadan came to a close throughout the Muslim world on the eve of the commemoration of the 9/11 attacks in New York, how Islam is faring vis-à-vis the rest of the world became the subject of introspective commentaries and studies. 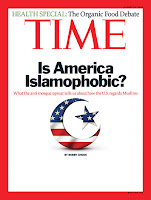 A Time Magazine issue timed for Ramadan asserted the observation of experts studying the subject that “Attitudes toward Islam have worsened perceptibly in the past two years, perhaps because of a string of terrorism-related incidents involving American Muslims,” such as the would-be Times Square bomber and a military shooter. These recent episodes apparently rekindled fears that were already being assuaged in the years after 9/11. As Time Magazine noted, terrorist episodes in the past decade have led some people to sadly conclude that “Islam must be a violent creed.”

Moreover, publicity about gruesome punishments, such as the stoning of adulterers in Third World countries and the shocking Time cover featuring a young woman whose face was badly mutilated by the Taliban, serve as proof of Muslim savagery and backwardness. While Time noted that religious intolerance is not limited to Islam, as Jews, Mormons and other groups still experience “hate speech,” evidence of inequality of treatment keeps cropping up.

For instance, those protesting the building of new mosques in US communities argue that “Saudi Arabia doesn’t allow churches and synagogues, so why should the U.S. permit the building of Islamic places of worship?” Time points out that ignored is the fact that “the U.S. is not, like Saudi Arabia, a country with a state religion, or that America was founded on ideals of religious freedom and tolerance.”


Difficulties of practicing one's religion
This blogger has heard this complaint from Filipinos working in Saudi, as they relate how rosaries are confiscated in the airport and they have a difficult time trying to even gather for Sunday mass; whereas in the Philippines, they argue, mosques are present in just about every provincial capital and major city. It’s obvious that religious tolerance has to be taught everywhere in the world, but it’s growing. Statistics from Time Magazine noted 1,900 mosques for the U.S. Muslim population of 2.5 million, 2,600 in Germany for its 3.2 to 3.4 million Muslims, 2,100 mosques for the French 5.5 million Muslims and 1,500 mosques for the U.K’s 2.4 million Muslims. In Spain there are only 454 mosques for nearly a million Muslims, for understandable historical reasons: Muslims and Christians bitterly fought for political domination of that country for centuries.


Hoping for less discrimination against Muslims

The young women expressed the wish to see a world with less discrimination against the Muslims and more integration into a society that respects the religious beliefs of every citizen. Nes and Tasneem confessed to feeling some discrimination against them since they were young students. Nes said their headgear makes them stand out from the rest of the campus population, and how they would just look on as they join their friends at lunch in the cafeteria during Ramadan. But they also spoke of the communalities between Christians and Muslims such as a great reverence for the Virgin Mary.

Cecile and I agreed with their observation that much of the discrimination stemmed from a lack of real knowledge about the Muslim world, due in part to the inability of Muslim communities to integrate into society. Most of them continue to live in enclaves. We also agreed that culture and education are perhaps the best way to break down barriers, beginning with the popularization of heroes such as Sultan Kudarat, the Muslim leader who successfully resisted Spanish colonization and after whom the province in ARRM is named. The Abdulrauf sisters pointed out that the prejudice against Muslims is palpable in the media, so that it became a challenge for Nes to explore this subject,; she made her thesis in college the comparative study of the anti-Muslim slant in the three top newspapers in Cebu. I asked for a copy of her thesis and will write about it soon.

As we commemorate Eid’l Fitr, which was signed into law by former President Macapagal Arroyo, it’s notable that a number of Muslims have come up in public service. Only recently the Judicial and Bar Council nominated two justices of the Court of Appeals, Jafar Dimaampao and Abdul Wahid, as part of the short list submitted to President Aquino for the vacancy left in the Supreme Court by the appointment of Chief Justice Renato Corona. We also recalled such prominent leaders as former Sen. Santanina Rasul and her daughter, civic leader Amina Rasul Bernardo, and Saeed Daof, chief of the Southern Philippines Council for Peace and Development. In past years there were giant politicians Domocao Alonto, Ali Dimaporo, Salipada Pendatun and Mamintal Tamano, father of Adel. But we agreed with young UP cum laudes Nes and Tasneem Abdulrauf that a crying need of the Muslim population is to widen the education base to include more youths, as this is the only way for them to succeed in the world and break the barriers of prejudice and discrimination.

Do you have a comment?
Email Bel Cunanan at
polbits@yahoo.com
Posted by Veteran Journalist and Relentless Advocate of Truth at 6:01 PM