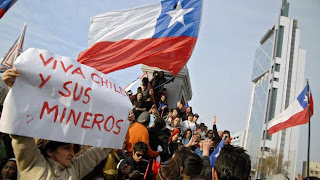 For all those folks around the world who, like me, are keenly following the plight of 32 Chilean miners and one Bolivian trapped 701 meters beneath the earth for a month and a half now, last Tuesday was a red-letter day. For once, what emerged from the deep hole was a message of hope and joy, and not enormous concern and anxiety, demonstrating once again the indomitable human spirit. Elizabeth Segovia, wife of a miner by the name of Ticona, had given birth to a healthy baby girl. Before the mining accident the couple had agreed to name the baby “Carolina,” but after receiving the news of his wife’s delivery, Ticona sent a message to his wife through a video recording, to change the baby’s name to “Esperanza,” the Spanish word for hope--and to give her “a long-distance kiss.” Interviewed by a TV channel for her reaction to the change, Elizabeth said she had exactly the same thought---“Esperanza” it should be. Hope.


Hope only in November
That little episode is so incredible, considering the depth of the miners’ current entombment in the mountains of Copiapo, Chile, and the uncertainty of their extremely dangerous rescue as yet, despite the furious drillings being undertaken by the Chilean government. The various international news networks are avidly covering the rescue efforts, but reports say that the earliest that the last man could be raised up would be early November, or nearly a month and a half from now. The Chileans’ prolonged “captivity”--- the longest recorded in the international mining industry---raises grave concern among the millions of people who are following this continuing saga of endurance---about how much the men’s morale can take by that time. It truly boggles the mind.

And yet, the parents of that new-born baby girl have not lost one bit of hope that they could be reunited one day soon. Indeed, as the saying goes, hope springs eternal in the human breast. For all those who are tight situations that may seem hopeless, it’s good to remember the courage this couple inspires. Viva la Esperanza. 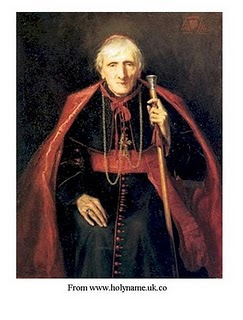 These four days from Sept. 16-19 are also red-letter days for Catholics in Great Britain, as Pope Benedict XVI conducts his four-day visit to England and Scotland. His visit is being fully covered by the international press as this is the first time by a Roman Pontiff in 28 years and the first-ever state visit by a Pope to the UK, which is the seat of the Anglican Church, otherwise known as the “Church of England,” the UK’s official religion, with the Queen as its head. Thus, Benedict’s visit augurs well for inter-faith dialogue. It’s also timed for his beatification of John Henry Cardinal Newman, a major Catholic intellectual figure in the 19th century, in his native Birmingham in England this Sunday. Not only did Newman tower in the Christian world because he lived for 89 long years (1801-1890) but also because of his vast contribution in religious writings. In the Catholic faith beatification is a step away from canonization, which is the raising of the blessed to the altar of the saints.
Cardinal Newman’s biographer, John Cornwell, posted in his homepage that that the process of the late prelate’s canonization began some 50 years ago. Pope John Paul II declared him “venerable” and “servant of God;” the present pope, reportedly a keen student of Newman’s works, pushed for his beatification, following the reported miraculous instant recovery of a Boston deacon named Jack Sullivan, who was unable to walk and in great pain after a spine surgery. The “miracle” met with mixed reviews in Britain, despite the attestation by Sullivan’s neurosurgeon, Dr. Robert Banco, that it was indeed an inexplicable and incomparable recovery he hadn’t seen in 15 years’ practice; but the controversy did not deter Benedict from declaring Newman blessed. Sullivan plans to be at Birmingham for the big day.

The popularity of Cardinal Newman as a major thinker, as Cornwell points out, is witnessed by the fact that so many colleges and associations have been named after him in the English-speaking world. My husband, for instance, was a member of the “Cardinal Newman Forum” at the US Military Academy at West Point, a study club that interacted with other student forums in the US.  Newman is known worldwide for his “Lead Kindly Light,” one of the most popular religious hymns, and the great English composer, Sir Edward Elgar, set his poem, “The Dream of Gerontius,” to music.
But perhaps the most interesting fact about Cardinal Newman is that he began his career as an Anglican churchman and scholar and ended it as a Roman Catholic Cardinal. In his early years, said his biographer, Newman was a major figure in the “Oxford Movement,” a High Church effort to return the Church of England to its Catholic foundations. Eventually, he noted, Newman’s studies in history persuaded him to become a Catholic. At the very least, therefore, his beatification on Sunday by Benedict XVI will not be met with indifference in the UK.

Today the Erda Group, led by Erda Foundation, also celebrates a red-letter day, its Founder’s Day in honor of the French-born, naturalized-Filipino priest Pierre Tritz, who also marks his 96th birthday on Sunday, Sept. 19. The half-day celebration, with its theme of “Becoming the Best of Ourselves in the Service of Children, for the Greater Glory of God", is being held at the Erda Technical-Vocation High School compound in Pandacan. It kicks off with a mass celebrated by the still-ramrod straight Fr. Tritz, who at 96 remains perhaps the oldest working Jesuit anywhere in the world.


Involvement with ERDA
This blogger has been involved with the Erda Group for decades now, since Erda VP Susan Sulit, my fellow Upscan, first invited me to a lugawan fest to raise funds for Erda’s streetchildren. Erda’s cause immediately tugged at my heartstrings. Blessed with a good education by very hard-working parents, I had been convinced long ago by Fr. Tritz’s advocacy: that education and training are the only way to break the cycle of poverty gripping many Filipino families. Erda has proved this philosophy time and again. At Erda Tech, students from the poorest families in Metro Manila are given free five-year high school and training in any of several technical skills, plus on-the-job-training in private companies and precious values education. After graduation they are able to get employment in various firms and some go on to college at night. But most of them become skilled assets to their families. On the other hand, Erda Foundation supports almost 25,000 public school students in the pre-school and elementary level with school materials, transportation and uniforms each year, thus preventing them from joining the big dropout statistics. 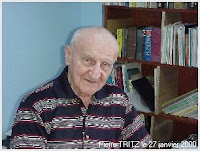 Each year as Erda celebrates its Founder’s birthday, Fr. Tritz and I go through the motions of keeping track of the exclusive club---and getting more exclusive by the year---of Jesuits above the age of 90. Tritz ended up here quite by accident from China, where he was stationed as a young Jesuit until the fall of China to communist hands in 1949. China’s loss was RP’s gain and he never left since. A psychologist by training, he saw early enough the alarming dropout rate in this country and began to investigate why it’s happening. He realized that it’s the lack of material and sociological support in tuition-free public free public schools that causing children to drop out. In 1974 Fr. Tritz set up Erda and God only knows how those tens of thousands of children who managed to stay in school with Erda’s support since 1974 would have fared, had he not gotten to work.

Do you have a comment?
Email Bel Cunanan at
polbits@yahoo.com
Posted by Veteran Journalist and Relentless Advocate of Truth at 5:50 AM