The sociology of Pinoy families in crisis 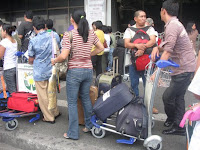 Sociologists like to point out that one gets to understand and appreciate the strength of Filipino family ties in times of crisis or festive occasions. The best places to see this strength and resilience at work are in the hospitals where families gather to comfort one another over a sick relation, or at the airport where an entire barangay would accompany an OFW out to try his luck in Saudi or Dubai.  One sees these family ties operating also at weddings or at wakes---no matter how hard-up the family is, its members would come in droves to celebrate a union of hearts, or sympathize with the death of a loved one. This is especially true in the provinces and Manila employers can only wring their hands when a house help asks to be allowed to go home to attend a relative’s funeral. It usually means two weeks’ absence.

I saw this sociological reality up close when the family of my brother, Luis “Totit” Olivares, Jr., underwent a crisis in the past three weeks. His wife, Rosario “Nena” Magsaysay Barretto Olivares, who had been undergoing regular dialysis for about five years, had a heart attack four Saturdays ago.  Rushed by house-helpers to Medical City (no one else was at home at the time) she stayed in the intensive care unit for nearly three weeks, slowly drifting back from unconsciousness and undergoing various procedures to strengthen her heart and lung activities. Four of the Olivareses’ six children live and work abroad and they came home regularly to visit their parents, especially when their mother’s condition began to worsen. In her final crisis, they rushed home with their spouses and children. 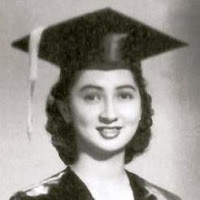 Totit and Nena met in the US when both were students, he as a scholar at the Jesuit-run Fordham University in New York, taking up his master’s in Economics after graduation from the Ateneo University, and she as a Smith-Mundt Fulbright scholar in Southeast Asian Economics at Cornell University in upstate New York, where she worked with the eminent expert on SEA, Prof. Frank Goulay.  Nena combined a dresden-china beauty and brains: she was valedictorian in high school and college at the old Holy Ghost College near Malacanang, where she also obtained her BS Commerce, major in accounting, summa cum laude.  They were married in the Jesuit Church of St. Ignatius on Park Avenue and 84th St. and worked in prestigious firms abroad before returning to their home country. Totit joined Bancom and later set up his own consultancy here, while Nena went on to become president of "Phil. Journalists, Inc." and of "News Today". .

*   *   *
Through the 49 and a half years of their marriage, the family remained remarkably closely-knit even though globalization had kept them apart, with four of their six children living and working in various parts of the world as accomplished professionals. The sociology of the Pinoy family in crisis was at work during Nena’s 20-day confinement at the ICU, when they all rushed to their mother's side.  Ivee Olivares, a well-known  artist, flew in from Chichester, three hours by train from London, while Gina and Ramon Jocson flew in from Singapore where he’s vice-president of IBM for the Asian region, with their two children; Buster, a Wharton graduate connected with a financial consulting firm, and his daughter Bea flew in from Washington, D.C. (wife Riza, an emergency nurse at the Georgetown University Hospital, stayed behind).  Tricee and husband David Loeb, live in New York City where she is a ranking PepsiCo executive, while he’s an investment banker. Tricee had just landed in New York from a business trip in Shanghai when she got the call about her mother’s heart attack. She took the next plane out and got to Manila more than 40 hours after leaving Shanghai. David followed two days later.  On hand to meet their various siblings were the two Manila-based kids, Chuck Olivares, who’s into stocks, and his wife Ginger, and Peachie Olivares-Motus, who works for an American consulting firm here, and husband Ronald, who runs an outdoor advertising firm.

Nena’s husband, Totit, faithfully kept vigil in the ICU waiting lounge during the day, and in fact the way he took care of his wife in her deteriorating kidney condition over the years, including taking her on her twice-weekly dialysis without fail for about five years, is now legend in our family. Two years ago Nena expressed a wish to see Boracay, and so Totit’s siblings planned a trip there. Totit brought all the paraphernalia he needed to check on her health, and while waiting at Caticlan for the boat to take us to the island, he was taking her blood pressure and making sure she was comfortable.  He had the list of various clinics in Kalibo where she could have an emergency dialysis. He had been planning for their golden wedding anniversary next June, but God wanted Nena home ahead. 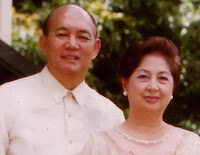 *   *   *
As the children flew in from abroad in this recent illness of their mom, they would send their father home in the evenings to get a good rest, and they took turns, couple by couple, to sleep in the hospital in case an emergency developed.  The problem was, there is no place for watchers to wait, much less sleep, except in the ICU lounge which is full of visitors in the daytime, but mercifully not as crowded at night.  The hospital discourages ICU patients’ relatives from converting its rooms into what really amounts to hotel rooms.

What the Olivares siblings did to solve that problem was to pack a small suitcase with beddings and some pillows and tuck it under the row of chairs they occupied in the daytime; at night they’d pull two of these rows of chairs and convert them into some kind of barrier around a four by four feet floor space they claimed for  sleeping quarters, to set it apart from other spaces claimed by other families. They nicknamed the commandeered space the “Medical City Hilton.”

One of those who took his turn at sleeping on the floor was David Loeb, the Jewish American investment banker. In one of my visits Triccie recounted with a big laugh how David slept in the “Hilton” quite well.  In fact, she said with a wry smile, so comfortable were they that she noticed that they were made to sleep there more often than the other family members.  In a chat, David related to me how for him the “Hilton” stint was an entirely new and unique experience; he’s sure he’d never encounter it anywhere else in the world---especially not in New York.  Nor in Singapore, said Gina Jocson. David recounted that when his grandmother fell ill and was confined in a New York hospital, they couldn’t stay beyond visiting hours;  the best they could do was to leave their cellphone number at the nurses’ station.  The Olivareses got to crack a lot of jokes about the “Hilton,” such as how they now know what it feels like to be bed-spacers, or even homeless.

David shared everything the family did, including visiting the Padre Pio Shrine, near Eastwood  to pray for a miracle for their mother.  He and Tricee had been married for just over a year, so many aspects of Pinoy culture were still quite new to him. But the sleeping-on-the-hospital floor togetherness that sociologists love to cite is definitely so Pinoy---difficult to handle, but also the constant source of our strength as a people.

Last Wednesday at close to midnight, Nena’s family crowded into the tiny ICU cubicle as her heart flattened out on the screen. They stayed with her for the next two hours. Toward noon the following morning, as rains fell gently over Loyola Memorial Park in Marikina, her remains were cremated there and a wake was held at the Church of Sta. Maria della Strada.  As her husband and children bade Nena a final teary goodbye before the crematorium door shut, the other relatives chose to stay in the room outside.  No one wanted to intrude on their togetherness.

Posted by Veteran Journalist and Relentless Advocate of Truth at 10:37 AM