Some thoughts for this beautiful Sunday:
*A cross-stitched sign in a Tokyo department store:  “Enjoy Life---This is no rehearsal”

* A sign floating in the internet:  “Tiene la eternidad para descansar.” Translation: One has all of eternity to rest. Meaning, here on earth, our plight as humans is to work, work, work.  Yet we should find time to smell the flowers, watch the glorious sunset, squeeze the hand of the one we love and murmur a prayer of thanks to the Lord for all these blessings.

T’is the season for firing people. Last Friday I wrote about how PCSO GM Rosario Uriarte, who had run PCSO for some time, was bamboozled into signing a prepared resignation letter by new Chair Margie Juico, in front of newly appointed GM Rojas and former Civil Service Commissioner Karina David. Well, there’s another horror story.

A hotel manager was telling friends that he recently ran into long-serving Tourism Undersecretary Ed Jarque, who’s quite popular among the hotel industry people, and when he asked how Jarque has been, the latter replied that he was jobless. Why is that? Jarque said that he was briefly abroad at the time of President Noynoy’s inauguration, and when he got back to his office, he found it not only shut, but the lock was changed! Parang na-sheriff si Ed, someone wryly commented.

Apparently, in connection with a presidential memo, all non-CESO officials are being laid off and Jarque, together with the other undersecretaries of DOT, are non-CESO. If this is the rule, so be it. But I think the termination of out going government officials has to be conducted in a more civilized manner than this administration has been doing.  Is President Noynoy aware of the ill-will such brashness is creating, not to mention the personal indignities these officials are being unjustly subjected to ?

I felt sad that President Noynoy has removed Dr. Prisco Nilo as the weather bureau Pag-Asa’s Chief, and replaced him with a geologist. Aquino was reported in the papers as saying he was angry that Nilo could not have predicted that typhoon “Basyang” would hit Metro Manila. But as the Star noted, replacing him with a geologist won’t help the situation, as Pag-Asa suffers from the shortage of proper equipment and has been losing its trained people to foreign jobs owing to low pay. Dr. Nilo may not have the show-biz personality to impress TV audiences in briefings, but he has been a dedicated public servant, working despite great odds. Besides, even the most sophisticated weather agencies abroad from time to time are unable to predict the pattern of climatic disturbances, owing to the aberrations caused by climate change.

Reports say the board of directors of the Subic Bay Metropolitican Authority (SBMA) plans to challenge before the Supreme Court the President’s decision to fire all midnight appointees of former President GMA, which includes half of the board members. This is a good move, for as I pointed out in a previous column, the High Court needs to review once and for all the multi-tangled issues in this current controversy of firing people---what is constitutional and what is not; what’s civilized and what’s not, etc. This is necessary in view of the hostile attitude of the present administration towards its predecessor.

In our recent dzRH program (heard every Sunday evening from 8-8:45 pm.), Cecile Alvarez and I interviewed famed economist Bernardo Villegas, professor emeritus of the University of Asia and the Pacific, who obtained his Bachelor’s degrees in Commerce and the Humanities (both summa cum laude) from De La Salle University and his Ph.D in Economics from Harvard University. For two years he was visiting professor at the famed IESE Business School in Barcelona. Indeed, to do justice to the CV of Dr. Villegas, who hails from San Juan, Batangas, would have taken all of our 45 minutes; but one of the most interesting items in it is that he’s the grandson of Gen. Miguel Malvar, who holds the distinction of being the last Filipino general to surrender to the American forces in the Filipino-American War at the close of the 19th century. His 102-year old mother, Isabel, is the last surviving child of Gen. Malvar, and though wheelchair-bound now, she remains very lucid in mind and spry in spirit.

Because Dr. Villegas was a member of the 50-member Constitutional Commission convened by the late President Cory Aquino, he’s naturally interested in the pronouncement of candidate Noynoy that he was open to charter amendments in the economic sector. Villegas thinks this is a distinct possibility and given the fact that he has been adviser to various presidents, I’d move it from the realm of speculation.

A specific charter area Villegas would like to see revisited is the education sector which the Constitution protectively keeps 100 percent in the hands of Filipinos. He notes, however, that foreign investments in this sector have come into various countries in Asia; in fact, he asserts that there is no major educational institution abroad that has no partnership with Asian countries except Manila. He cited the following tie-ups as examples: Barcelona’s IESE Business School and Harvard University with China; Hongkong University with Harvard; Singapore with INSEAD, the prestigious business school in France, and Kuala Lumpur with Northwestern University, one of the US’ Ivy League schools.

More on Bernie Villegas’ views on bright prospects in the economy this Tuesday, e.g., set up bed-and- breakfast places in touristic provinces and retirement villages for elderly Japanese. He’s not called the “prophet of boom” for nothing. 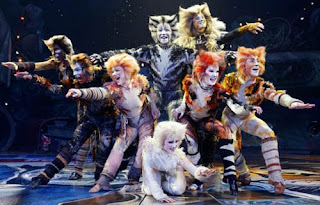 Cats’ long history began on a London West End stage in May 1981 and went on to win a record-breaking number of awards worldwide, including two Olivier Awards and seven Tony Awards. From London, Cats strutted its way to Broadway in October 1982 up to September 2000. After 18 years Cats went on to become the longest-running musicale in both West End and Broadway history, until it was overtaken---as always happens in all musicales--- by “The Phantom of the Opera” on Broadway in January 2006, followed by “Les Miserables” claiming the West End title in October that year. Cats played its final West End performance on its 21st birthday on May 11, 2002, but a touring production continues to play around the world. It has been presented in 10 languages in 300 cities in over 26 countries. Even just watching and hearing Lea as the unforgettable Grizabella, the glamour cat, singing that memorable “Memory” is worth it, but the dancing and singing of the entire troupe are more than bonus.

Posted by Veteran Journalist and Relentless Advocate of Truth at 2:54 PM