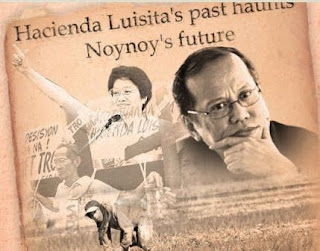 History conspired to enable the Cojuangcos to acquire and keep the 6,500 hectare- Hacienda Luisita, that lies at the heartland of the vast central plains of Luzon. By the way, as an interesting footnote, the controversial hacienda was named not after any Cojuangco grande dame, but after Dona Luisa, the top official of Tabacalera, which had originally acquired the vast lands from the Spanish crown in 1882, and from whom Don Pepe Cojuangco Sr., P-Noy’s grandfather, acquired it in 1957. Records indicate that Don Pepe’s family received what a writer termed “significant preferential treatment and assistance from the government” to take over Hacienda Luisita and Central Azucarera de Tarlac that year.

To be able to take over the Central Azucarera, Don Pepe Cojuangco took out from the Manufacturer’s Trust Co. in New York a 10-year, $2.1 million loan which was “guaranteed” in a way by the Central Bank of the Philippines. The CB was headed at that time by Don Pepe’s former business partner, Gov. Miguel Cuaderno, who deposited a significant portion of RP’s international reserves with Manufacturer’s Trust to indicate that the Cojuangcos meant business in acquiring the Central. In addition, records indicate that to “sweeten the deal,” the GSIS provided a P5.9 million loan to Don Pepe to finance his purchase of Hacienda Luisita.

All these were made possible because young Ninoy Aquino was President Ramon Magsaysay’s fair-haired boy and records indicate that the Cojuangcos took advantage of that link. To help quell the agrarian unrest and the Huk rebellion in Central Luzon , RM sent Ninoy in 1954 as his personal emissary to the legendary Huk leader Luis Taruc, and Ninoy is said to have claimed credit for the rebel leader’s surrender four months later. In 1955, Ninoy became mayor of his native Concepcion, Tarlac, and married Don Pepe’s daughter, Cory, with President RM as their ninong. His father-in-law also made Ninoy the Hacienda’s first administrator.

But the significant thing was that the generous government accommodation to the Cojuangcos carried a strict stipulation that the Hacienda’s acquisition was to be at the heart of President Magsaysay’s social justice program. CB records indicate the emphasis of “a view to distributing this hacienda to small farmers in line with the Administration’s social justice program…” (CB Monetary Board Resolution No. 1240, Aug. 27, 1957), while the GSIS demand was more unequivocal: after 10 years of the Hacienda’s acquisition, it would be “subdivided among the tenants who shall pay the cost thereof under reasonable terms and conditions.” ( GSIS resolution No. 1085, May 7, 1957; GSIS resolution No.3202, Nov. 25, 1957).

The conditions for the Hacienda’s acquisition were quite clear, but it was also clear that, as critic Christian Monsod, a member of the Constitutional Commission that drafted the 1987 Constitution and who was in the middle of brokering the talks between the farmers and the landowners, said recently, “the Cojuangcos don’t want to let go of the land.” The Marcos government tried various ways of enforcing the redistribution scheme in the courts, to no avail, and farmers’ groups began organizing to claim their rights. When Cory Aquino became President through People Power in 1986, she made land reform the “centerpiece” of her social reform program. The new Congress drew up the Comprehensive Agrarian Reform Program the following year, and Aquino signed it into law on June 10, 1988.
But CARP also opened the door to another option, the Stock Distribution Option (SDO) to Hacienda’s over 10,000 workers as well as other landlords who also did not want to give their lands up to their farmers. The SDO was furiously denounced by then Senate Minority Leader Juan Ponce Enrile, who stressed the Cojuangcos’ refusal to enforce the stipulations of their 1957 loan acquisition. But President Cory’s officials worked to dismiss the pending move of the Marcos government in the Court of Appeals against the Cojuangcos’ failure to carry out land reform and install the SDO instead. Among them were Justice Secretary Franklin Drilon, Solicitor-General Francisco Chavez, Agrarian Reform Secretary Philip Juico and GSIS President Feliciano Belmonte. In the new Aquino restoration, Drilon is a senator; Juico is the spouse of PCSO’s powerful Chair Margie Juico, and Belmonte is the Speaker of the House; only Chavez appears to be out of the loop. But in fairness to Speaker Belmonte, he recently questioned the validity of the SDO in the light of the passage in August 2009 of the CARP Extension & Reform that abolished this option and extended land distribution for another five years with a budget of P150 billion for landowner compensation.

The Cojuangcos realize, more than anyone else, that the sugar industry is a sunset industry. Obviously they want to keep the land not to continue planting sugar, but because they realize that those vast lands would have immense value as industrial zones; it looks like they would fight tooth and nail to keep the estate. This is because the new international airport will inevitably transfer to Clark, right next to Luisita’s lands, and the Subic-Clark dedicated road that runs through Luisita in some part is expected to push the industrialization of the region in a matter of time. NP spokesperson Gilbert Remulla was quoted during the campaign as stressing that by the mere construction by government---free of charge to the Cojuangcos---of an interchange from the Hacienda to NLEX and the route north, the value of the estate shot up from P600 million to P60 billion. I don’t know how accurate Remulla’s figures are, but it’s certain that the Cojuangcos are better off with shares of stock owned by their farmer workers that they could perhaps buy off later, rather than to redistribute the lands to the tenants, only for them to lose those lands because they couldn’t work them.

The following was recently emailed to this blog column by someone who answers to the name ‘bejamiju’:

“THE DIFFICULT THING ABOUT PROFESSING ONE'S LOVE FOR THE POOR, ABOUT BEING HONEST OR AT THE VERY LEAST NOT BEING CORRUPT IS THAT OCCASIONALLY ONE HAS TO DO SOMETHING TO SHOW THAT HE OR SHE ACTUALLY MEANS THEM OR ELSE THEY JUST BECOME EMPTY PHRASES WORTHY OF JUST ANOTHER POLITICIAN. I GUESS IN THE CASE OF CARP AND THE HACIENDA LUISITA THIS IS SIMPLY ASKING TOO MUCH OF THE AQUINOS--- BOTH THE MOTHER AND THE SON. THE MOTHER IN THE LAST MONTHS OF HER PRESIDENCY SENT ONE OF HER CABINET SECRETARIES TO BRIEF SOME OF HER CLOSE FAMILY FRIENDS ABOUT THE STOCK OPTION ALTERNATIVE AS A WAY OUT OF CARP.

THE SON IS NOW GIVEN THAT RARE OPPORTUNITY TO RIGHT THE WRONG AND HARM DONE TO THE LUISITA FARMERS BY AT THE VERY LEAST CONDEMNING THE LAST-MINUTE ATTEMPT OF HIS FAMILY TO HANG ON TO THEIR LAND. AFTER ALL WHEN HE WAS SEEKING THEIR VOTES HE WAS PREPARED TO SAY ANYTHING, EVEN HINTING THAT HE WAS PREPARED TO CONVINCE HIS FAMILY TO SETTLE THE ISSUE ONCE AND FOR ALL IN FAVOR OF THE FARMERS. HIS SILENCE SPEAKS VOLUMES ABOUT HIS CHARACTER AND HE CANNOT EVEN HIDE BEHIND THE LAME EXCUSE THAT HE DOES NOT WANT TO INFLUENCE THE COURTS, BECAUSE HE HAS ALREADY ON TWO OTHER OCCASIONS DONE PRECISELY THAT IN THE CASE OF TRILLANES AND LACSON. SO MUCH FOR THE HOPE OF THE COUNTRY.THE EMPEROR HAS NO CLOTHES AFTER ALL."

Posted by Veteran Journalist and Relentless Advocate of Truth at 9:32 PM